Week Rewind 17, you will get all the quick rewinds of last week, including hot topics and new innovation. Last week From 18th January 2021 to 31st January 2021, was a wonderful week in terms of few new innovations in gadgets. We had LG set to develop Auto Doors using transparent OLEDs, AOW 3: APPS OF THE WEEK, YouTube is testing out a new shopping feature, Youtube adds voice commands to promote hands-free usage, Mobile Games That Never Go out of Style, Oneplus 9 is going to have Telephoto Lens only, Microsoft Making Laptop That Can Automatically Adjust Its Screen, Get Solutions to every problem related to SSD | Ultimate guide to SSD, Specification of Asus ROG's latest addition revealed, can be named ROG Phone5, skipping its 4 iterations entirely, Airtel 5g is here | Airtel demonstrated 5G network in Hyderabad, AOW 4: APPS OF THE WEEK, Samsung considering to bring Exynos chipsets in upcoming PC and Laptops, USA admin revokes Intel’s license to supply chips to Huawei 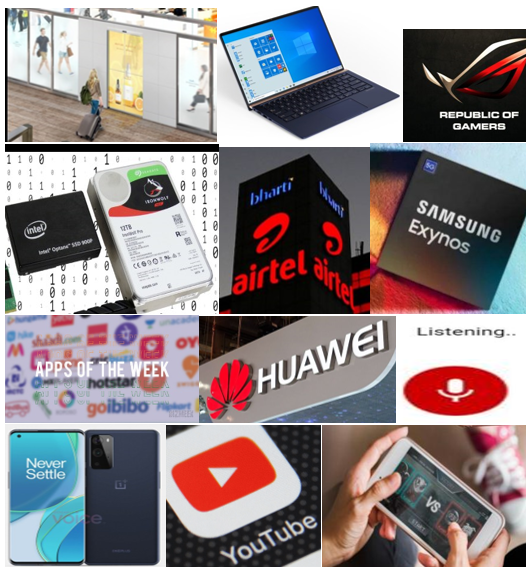 A 55 inch LG OLED display panels will be used on these automatic doors. This will create a whole new section of revenue for airports and other commercial buildings like malls and another well-viewed area for companies where they can advertise their products.   Detailed Read Here.

Our main ideology for this is to list out the best user-friendly, lesser time-consuming, & overcoming the confusion from the pool of apps. This is more like finding a shell from the deep ocean.   Detailed Read Here

The function is presently being examined through the video-streaming platform with a small number of customers in the US on Android, iOS, and the Web. Chosen creators who are part of this pilot can add their merchandise to their videos that will be handy for buy by using a shopping bag icon.  Detailed Read Here

First-time users have to provide YouTube with microphone permission. The feature can be used by clicking on the microphone icon displayed along the search bar. The icon can be grey or white depending on the theme user has set.  Detailed Read Here

5. Mobile Games That Never Go out of Style

While many people are still sceptical of mobile gaming and the types of games it offers, it’s clear that its future is bright. That being said, here are the types of mobile games that always seem to do well.  Detailed Read Here

6. Oneplus 9 is going to have Telephoto Lens only

As we have seen the trend that any great implementation in OPPO is carried to the OnePlus device. Despite the fact that OPPO and Realme have periscope lenses but still, the OnePlus 9 leaks suggest that the device won't be having one.   Detailed Read Here

7. Microsoft Making Laptop That Can Automatically Adjust Its Screen

Earlier this month, American tech giant Microsoft filed for a new patent in Europe for a unique laptop that could potentially adjust the viewing angle of its display based on the user’s gaze. The US Patent and Trademark Office recently published the patent.  Detailed Read Here

8. Get Solutions to every problem related to SSD | Ultimate guide to SSD

Here come Solid State Drives, having really fast speeds but are relatively lower capacity, if we consider same price segment HDD and SSD. For example, you can get a 1TB HDD for around $80 (approx. INR 5000) whereas in the same price segment you can have a 500GB SSD only.  Detailed Read Here

Previous entries of the same have worked well in the market and the followers of the brand are excited to know when the next version will be out. Asus ROG Phone series is known for its quirky accessories and loaded features on the phone itself.  Detailed Read Here

In association with Ericsson, Airtel claimed that it had the capability to operate its 5G network over the existing technology-neutral spectrum in mid-bands that are at 1800MHz, 2100MHz, and 2300MHz frequency alongside the sub-GHz bands available at 800MHz and 900MHz. Most importantly the upgrade through 5G speeds can be done with the help of a software upgrade.  Detailed Read Here

So, Gizmeek had decided to list out the Top 5 Indian Android developers apps of the week. Users will get this list every Friday from now onwards. We simply termed it as “APP OF THE WEEK”.  Detailed Read Here

Samsung is working on bringing its ARM-based chips to the PC. But what would an Exynos desktop chip look like? And how would it perform relative to the Apple M1?  Detailed Read Here

It doesn’t stop just there. In addition to this, it has also informed Huawei that the administration is planning to reject dozens of purposes for licenses to supply components and services to Huawei.  Detailed Read Here