The LG Magnit is the company’s first TV with a microLED display that is promised to offer “groundbreaking picture quality and durability.” It will be available in markets like the US, Europe, and a few others soon. For those unaware, microLED is a new breed of displays, which are similar to the OLED panels found in many TVs and smartphones but work with pixels that are a lot smaller. These pixels can be up to 100 times smaller, which should offer clearer images, better color reproduction, and better visibility from different angles.

Notably, LG isn’t exactly targetting the broad consumer market with Magnit. Due to its enormous size, it will likely be used in more commercial sectors like hotels or other large corporate lobbies and more. The Magnit isn’t the first monster TV to utilize MicroLED tech. Samsung last year unveiled The Wall Luxury, the latest version of its customizable modular MicroLED screen. It can be configured from a home-friendly 73-inches in 2K resolution right up to 292 inches in 8K. 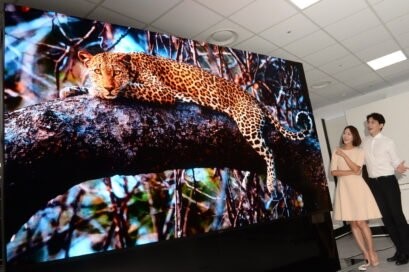 Sure, 4K may not seem as crisp on such a large screen, but there's no denying the potential impact when moving a signage solution like this into someone's living room. And it certainly seems like LG its sights trained on home cinemas, too – with the excellent webOS smart TV platform and state-of-the-art a9 processor used in the latest

Massive TVs are in demand right now, and for many people, bigger equals better. As such, LG has launched a television that could satisfy your craving for consuming content on near cinema-size screens. Sadly, it’s aimed at enterprise customers rather than millionaires with gigantic living rooms.