Week Rewind 19, you will get all the quick rewinds of last week, including hot topics and new innovation. Last week From 8th February 2021 to 14th February 2021, was a wonderful week in terms of few new innovations in gadgets. We had BookMyShow reveals its own movie streaming service, A Facebook Smartwatch is in the making with Focus on Messaging, Fitness, Realme to launch gaming accessories alongside Narzo 30 series, Intel Launched RealSense ID Facial Recognition System, Can Be Used With ATM's and System Locks, Slack for Android Could Have Exposed Your Password: Here’s How to Reset, AOW 6: APPS OF THE WEEK, Amazon all set to commercialize one Biometric Payment pay by hand waving, Xiaomi to launch two audio products in India on February 22, Redmi Note 10 series launching in March likely with high refresh rate screen, After 108 MP, Samsung working to launch a 200MP camera by the end of the year, Here’s Your Early Look at Android 12 Design, Lenovo has unveiled its latest set of Smart Glasses named Lenovo ThinkReality A3, OnePlus 9 Pro leaks with Camera Branded as Hasselblad, Apple patents new Face ID that uses facial heat mapping 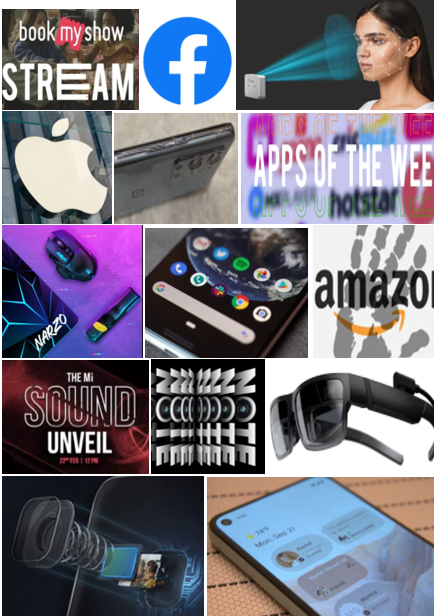 Online ticketing platform Book My Show has entered the streaming platform race with its new transactional video-on-demand carrier (TVOD) known as BookMyShow Stream that gives customers the choice to hire a film for a finite period or purchase it for limitless access.  Detailed Read Here.

2. A Facebook Smartwatch is in the making with Focus on Messaging, Fitness

Anyway, the company is said to focus on Message interaction in the Smartwatch. Users will be able to communicate with their friends on platforms like WhatsApp and Messenger. Now, you might wonder if it will require a Smartphone for integration and sync. Detailed Read Here

He shared an image of these accessories, which includes a gaming mouse, a mouse pad The mouse is a carbon copy of Logitech's staple G502 Hero, which could suggest a collaboration between the two companies.  Detailed Read Here

Intel claims that the technology adapts to the facial features of the user such as glasses, facial hair, and other changes that occur over time.  Detailed Read Here

5. Slack for Android Could Have Exposed Your Password: Here’s How to Reset

According to the email sent out by Slack, the issue was identified on January 20, 2021, and fixed on January 21, 2021. Slack is urging users to change their passwords and set a ‘complex and unique' password.  Detailed Read Here

Our main ideology for this is to list out the best user-friendly, lesser time-consuming, & overcoming the confusion from the pool of apps. This is more like finding a shell from the deep ocean.  Detailed Read Here

7. Amazon all set to commercialize one Biometric Payment pay by hand waving

People can join with simply one palm or both. Once signed up, human beings can maintain their palm above an Amazon One gadget to enter the Amazon Go stores. The announcement comes amid a speedy boom in the use of biometric repayments ranging from fingerprint verification on smartphones to greater state-of-the-art structures the use of facial recognition. Detailed Read Here

8. Xiaomi to launch two audio products in India on February 22

Now, as seen in the tweet above, Manu Jain does not reveal anything about what the two audio products are going to be. The teaser video suggests that the company can launch at least one pair of earphones and a speaker.  Detailed Read Here

The South Korean Giant is all set to introduce multiple new imaging sensors to the market including a 200-megapixel sensor by the end of the year. According to IceUniverse, a prominent tipster, these new ISOCELL sensors will be launched in 2021.  Detailed Read Here

This time around, an early draft of Google’s internal document meant for partners has leaked online, revealing the key design changes and few upcoming features in the operating system.  Detailed Read Here

12. Lenovo has unveiled its latest set of Smart Glasses named Lenovo ThinkReality A3

If we go by the looks, the Lenovo ThinkReality A3 glasses look like a weird set of sunglasses. It's by no means looks delicate but the frame can be enhanced with industrial standards for a more durable product.  Detailed Read Here

We can clearly see Swedish camera maker Hasselblad branding on the camera that points to the partnership between these companies. This would be the first time we will be going to see the camera sensor from Hasselblad.  Detailed Read Here

However, there are some drawbacks to the current system like glasses, face masks, and even hair that can potentially interfere with the authentication process. Detailed Read Here
Previous post