LinkedIn, seems to be the new threat to IOS users, after TikTok !

Microsoft-owned social media platform LinkedIn has been caught snooping on clipboard data on iOS devices. This was exposed after a new iOS 14 beta feature, that lets users know whenever any app accesses the clipboard. Not just LinkedIn, several popular apps, including Tik-Tok, have been caught doing the same. 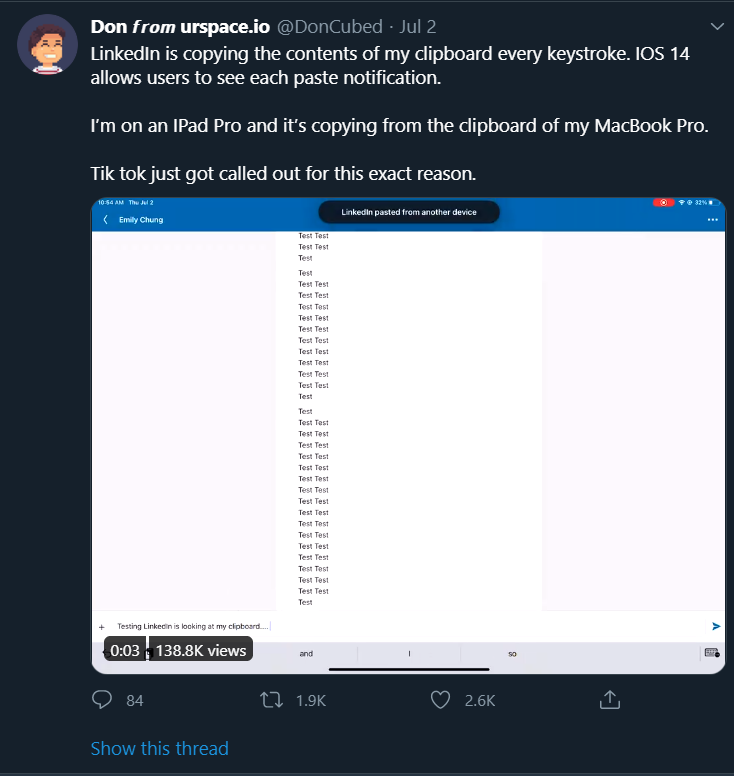 “LinkedIn is copying the contents of my clipboard every keystroke. IOS 14 allows users to see each paste notification. I’m on an iPad Pro and it’s copying from the clipboard of my MacBook Pro. Tik-Tok just got called out for this exact reason,” he tweeted. Apart from LinkedIn or Tik-Tok, there are other 60 apps to be precise, which were snooping on clipboard data.

Accessing the clipboard isn't a problem in itself. For example, apps such as Google Chrome and Google app need access to the clipboard for their paste and go feature to work. However, not every app has similar requirements, and it's important that the ways in which our data is being used by companies are made more transparent so that people can more safely choose which apps to use or avoid, and what data to share or withhold. But with iOS 14, it has started to notify users whenever an app accesses the universal clipboard. This is how popular apps are being called out by iOS14 beta users.

Erran Berger, VP Engineering, consumer products at LinkedIn admitted the issue and said that LinkedIn doesn’t store this clipboard data but the yet the organization will fix it in any case.