As we have mentioned earlier, there's no guarantee that the patent will ever see daylight. While the bendable hinge design makes the MacBook design more seamless, we can suspect it will take several years if Apple does consider it. That's all there is to it. What are your thoughts on the new Apple patent?

The Apple patent sounds similar to the hinge Microsoft unveiled with its Surface Book in 2015, which it refers to as a “dynamic fulcrum hinge.” Here, the hinge flexes as the laptop opens, while the display is removable from the hinge and can be replaced in the opposite direction, allowing for the laptop to be used in a tablet-like mode. Watch the video below for a quick demo of that hinge.

Overall the idea will give the device a "seamless overall appearance". There's no denying that Apple files a lot of patents. However, sometimes companies just secure the technology so others cannot adopt it before they do. Henceforth, it's never certain that any of the patents will see daylight any time soon. 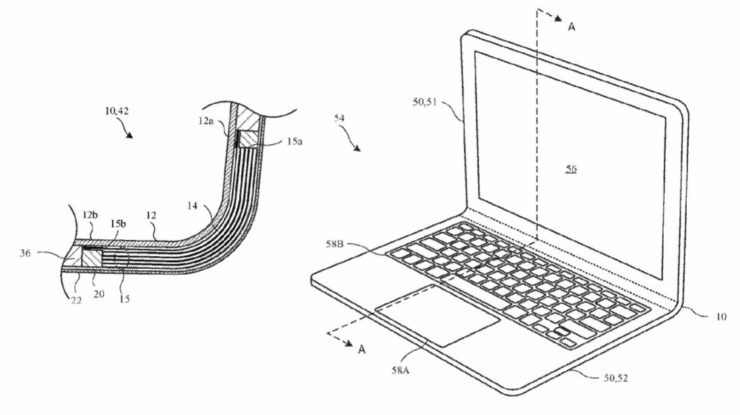 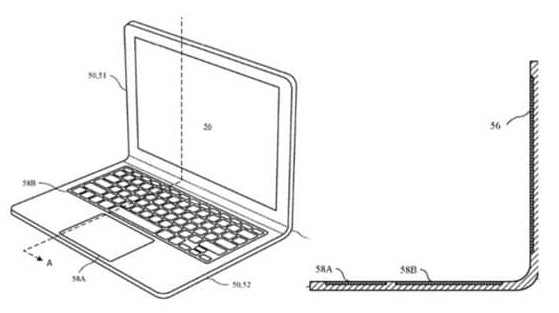 The latest hinges described will have the ability to adjust the angle of inclination. The patent also informs that they can be used in other mobile devices such as smartphones or tablets.

The solid-state hinge assembly can include a bending medium capable of:

According to Apple Insider, the main idea of the patent is to enable the creation of a one-piece laptop body with a bent part, which is also a hinge and an additional place for electronics. This type of design will allow further minimizing the size of portable computers. But, unfortunately, the idea of building a computer consisting of one part that bends in a certain place will make portable computers from Apple even more difficult to repair than today.

The hinge is where all the magic happens. it will house all the necessary connectors and wires to connect the keyboard with the display. In addition, the hinge must carry out the necessary "mechanical" communication between the primary and secondary parts of the device.

As with all Apple patents, it’s important to take this one with a grain of salt. The fact that Apple has been revising the patent since 2013 suggests this is an important area for the company, but it’s hard to know when, or if, such a hinge design will make its way to consumers.

Currently, the hinge of Apple's laptops is well tested. However, once the bendable hinge is placed, it also allows for other changes to be made - a flexible battery or display for instance. Furthermore, Apple's new patent also describes the design which can be implemented in a "smartphone cover or a tablet computer device".

To date, the difficulty with folding designs is to select a material that can be bent without damaging the device itself. In addition, such a bendable part should carry all the electronics that can now be found in the swivel joint of the MacBook and MacBook Pro.

Here’s how Apple describes the hinge design in its own words: