The patent was filed with the China National Intellectual Property Administration (CNIPA) and was discovered in WIPO’s global design database. Model A’s screen seems to be attached to a body that slides in and out of the phone. Meanwhile, the extended portion of the screen on the model B doesn’t seem to be attached to anything else. In theory, this means model B’s extended screen could be less durable. But this approach could potentially free up space on the inside of the phone, allowing for bigger batteries and other features as you don’t have to worry about accommodating a body inside of a body

The Huawei phone with an extendable screen here shows an almost bezel-less design. The screen on the rear is smaller than the main display. There is a triple camera system found at the back. We don’t see a front-facing camera but we’re assuming the rear cams may be used to take selfies. Huawei patent filing for two smartphones with a rollable, sliding display. The patent application, spotted in the World Intellectual Property Organization database, is in line with TCL’s prototype device. 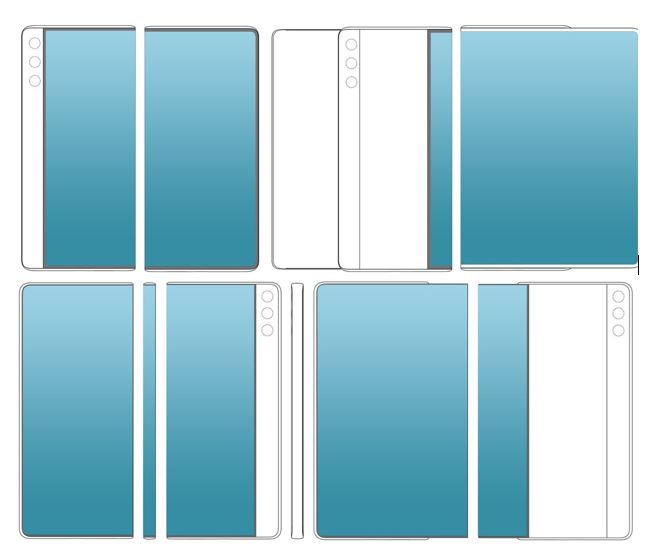 Huawei exhibited two different design styles which are described and illustrated by several images. The first model (Model A) has a significantly smaller pull-out display than the Model B. It features a bezel-less design and the flexible screen can be extended from the right side to the rear with a simple swipe of the finger. There is a vertical trim at the back which houses a triple camera setup. There is no indication of a front camera. You may have to just turn the phone over to take self-portraits with the main camera. The extension increases the display area by 30% on the model A.

For the second model, Huawei implements a different type of sliding system. This change sees the triple camera setup located on the left rear side instead of the right side. The flexible display also extends from the left. The extended part will be a lot thinner on the right side considering that the left side houses the rear sensors. With this design, the display area may be increased by up to 50% on the second design. However, in terms of practicality, the first design looks better. However, instead of an in-folding design, the new patented model has a pull-out display design.

Is PUBG Mobile, Spotify, Tinder, Pinterest crashes? Do you know why?

OnePlus Nord invite with AR Experience. Buy your own !!!!

OnePlus Nord invite with AR Experience. Buy your own !!!!