“We have been constantly monitoring the development of Realme India Twitter support account. We are also investigating the matter internally and will apprise you once we receive more information,” said Realme Officials.

Tipster Ishan Agarwal posted screenshots of what the hacked Twitter account of Realme India online support looked like. Only the profile name was changed to “: T e s l a”, while everything else, such as the number of followers and accounts followed, remained the same. The least it could do was to acknowledge the hack with a tweet in the interest of transparency, especially considering the company is tasked with handling the sensitive personal information of millions of users.

Going with the report, instead of posing a BTC wallet address, the hackers have asked users to visit a website. Usually, hackers post BTC wallet addresses and lure users by promising to double the return on an initial investment in cryptocurrency. 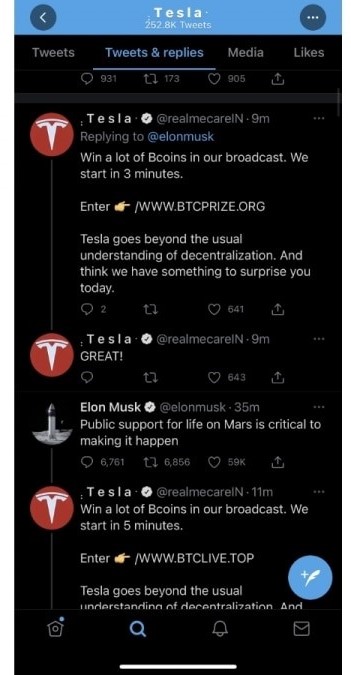 The account had 1.76 lakh followers at last count. Noted tech tipster and industry insider Ishan Agarwal was among the first people to highlight the hack. Do share your thoughts on the latest Realme Twitter hack in the comment section.

Elon Musk’s tweets. However, the hackers were fairly sloppy, as they forgot to change the text in the bio. Furthermore, the spacing between the letters looked suspicious too. Since Realme seemingly restored the profile at the time of writing, we could not verify the details. Interestingly enough, Realme has been very silent about the matter, at least on the microblogging platform.