Its campaign to plug the holes is apparently extending to threats of legal action, as the leaker known as “Kang” posted to Weibo this week about a notice he received from the company.

For his part, Kang claims to have never signed an NDA, published undisclosed pictures, or profited from his information. Still, the tracker shows his information has revealed details about everything from the iPhone SE to the HomePod mini. A popular leaker Sudhanshu Ambhore has received a legal notice from Xiaomi for leaking POCO M3 Pro’s pricing and specifications before the launch.

According to Sudhanshu, this is the first time he has received a legal notice for leaking price, specifications, and sharing YouTube video links of the unreleased smartphone. Leaks are interesting. Not only it engages fans but the company benefits from “free marketing” as well. However, it comes with its own risks. 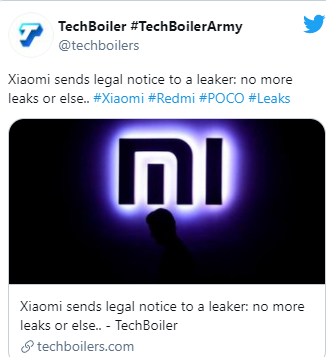 The legal notice comes from Xiaomi India. Interestingly, it was a leak for a European launch. Previously, DMCA was also received by other leakers. More interestingly, Xiaomi has also warned Sudhanshu to refrain from leaking any other Xiaomi product in the future.

Moreover, the leaker clarifies he has not signed any embargo or NDA for the product. If he hasn’t signed an embargo, then what’s the point of a legal notice?