Seagate: The first company to ship 3 zettabyte of storage since its inception

The company Seagate is a huge firm that sells internal, external, and portable storage drives.

As per the recent news, the company has declared that it is successful to ship about 3 Zettabyte(ZB) of data storage since its inception.

This is a great success that a data storage company has attained after working on it for 42 years. In 2014 after 36 years of inception, Seagate has passed over its 1 ZB milestone. And, after four years the company has achieved its 2 Zettabyte milestones.  In March 2021 the company surprised everyone with its announcement to attain the 3 zettabyte milestone and it only took two years to achieve this.

Now the question that arises is how much this 3 zettabyte storage can be? 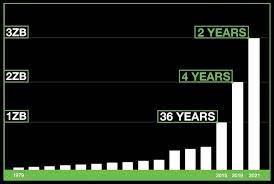 Well, 3ZB storage is such a large storage capacity, it is more than the imagination.

For an idea or overview, one can save about 2.5 quadrillion selfies, 4k movies, and around 7.3 trillion MP3 music in a storage capacity of 3 zettabytes.

Seagate says that there is more data that is being generated every day than the data being generated in the whole year about 20 years ago. So, to keep up with this unexpected pace of the data world, Seagate will keep innovating storage devices for users and clients.