Want to learn more about Apple's latest mobile operating system? We've got new iOS 16 features that you'll love and a couple of Apple Maps features that will improve how you travel.

iOS 16 has been out for over a week, and there's a lot to explore in Apple's latest mobile software update. The biggest new features include a new customizable lock screen, the ability to unsend and edit text messages and the ability to easily remove people, pets or objects from your photos. If you want to take a closer look at some of the hidden gems that iOS 16 has to offer, like password-protected photo albums and easily accessible Wi-Fi passwords, here's what you need to know.

With iOS 16, Apple haven't scrimped on the little, yet really cool features that'll make your life way easier. In fact, they've packed so much into this release that we've already written a piece about the iOS 16 hidden features to try, but have since found loads more!

That's why we've compiled this list with more of our favorite iOS 16 hidden features that will make your life easier and which you probably didn't know about already. Read on to learn how to get the most out of iOS 16. 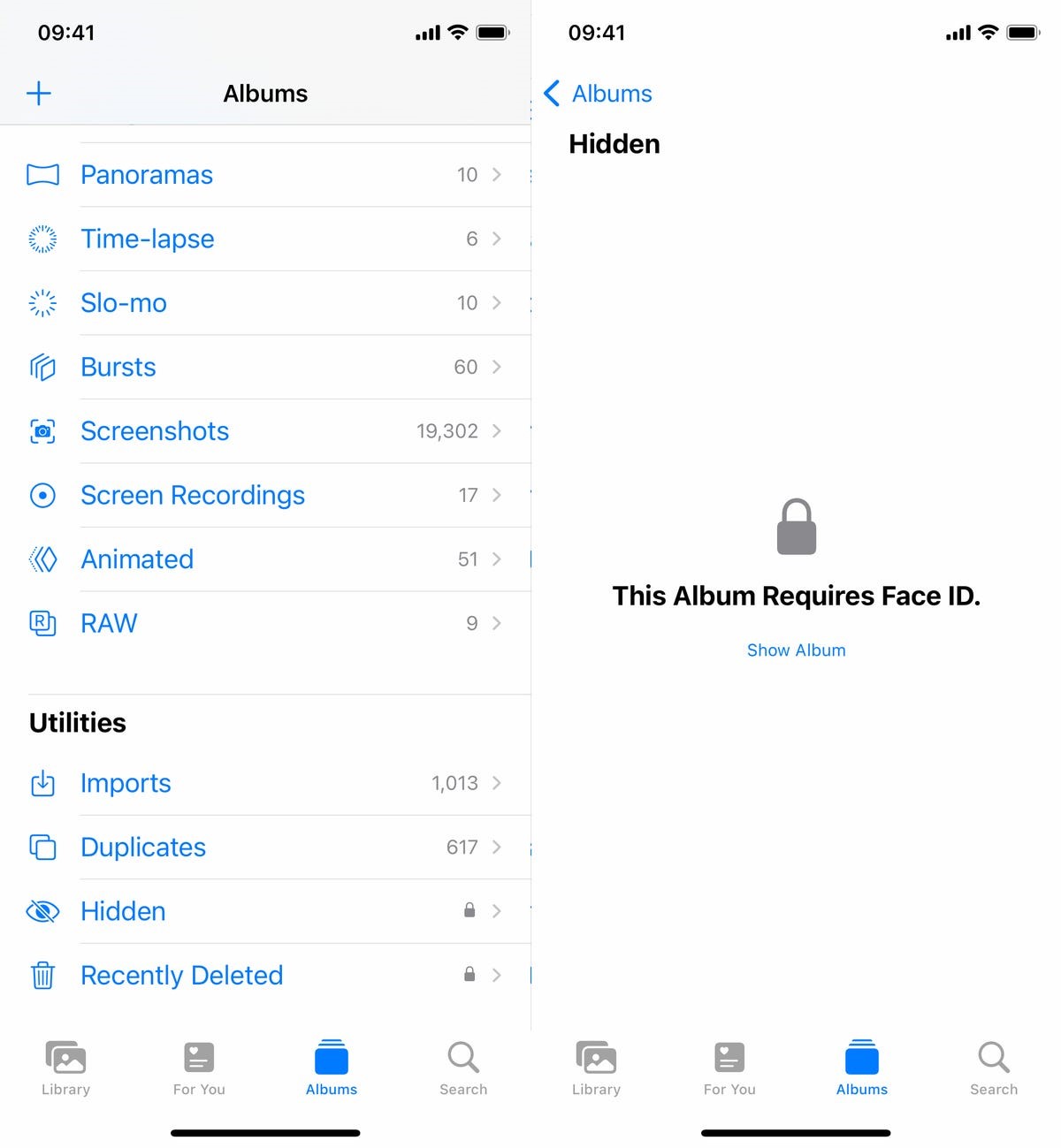 The Hidden album in the Photos app is clearly not hidden, seeing as anyone can easily find it. That makes it impractical for adequately hiding private photos and videos. While Apple does have an option to make the Hidden album "invisible," anyone with access to your phone could make it visible again and view everything inside.

Thanks to iOS 16, you can now lock the Hidden album. You don't actually need to do anything to toggle this feature on. If you want to check it out, launch the Photos app and go to the Albums tab at the bottom of the screen. If you scroll down, you'll see a tiny lock next to the Hidden and Recently Deleted albums. To view the contents of those albums, you'll need to use Face ID or your passcode. 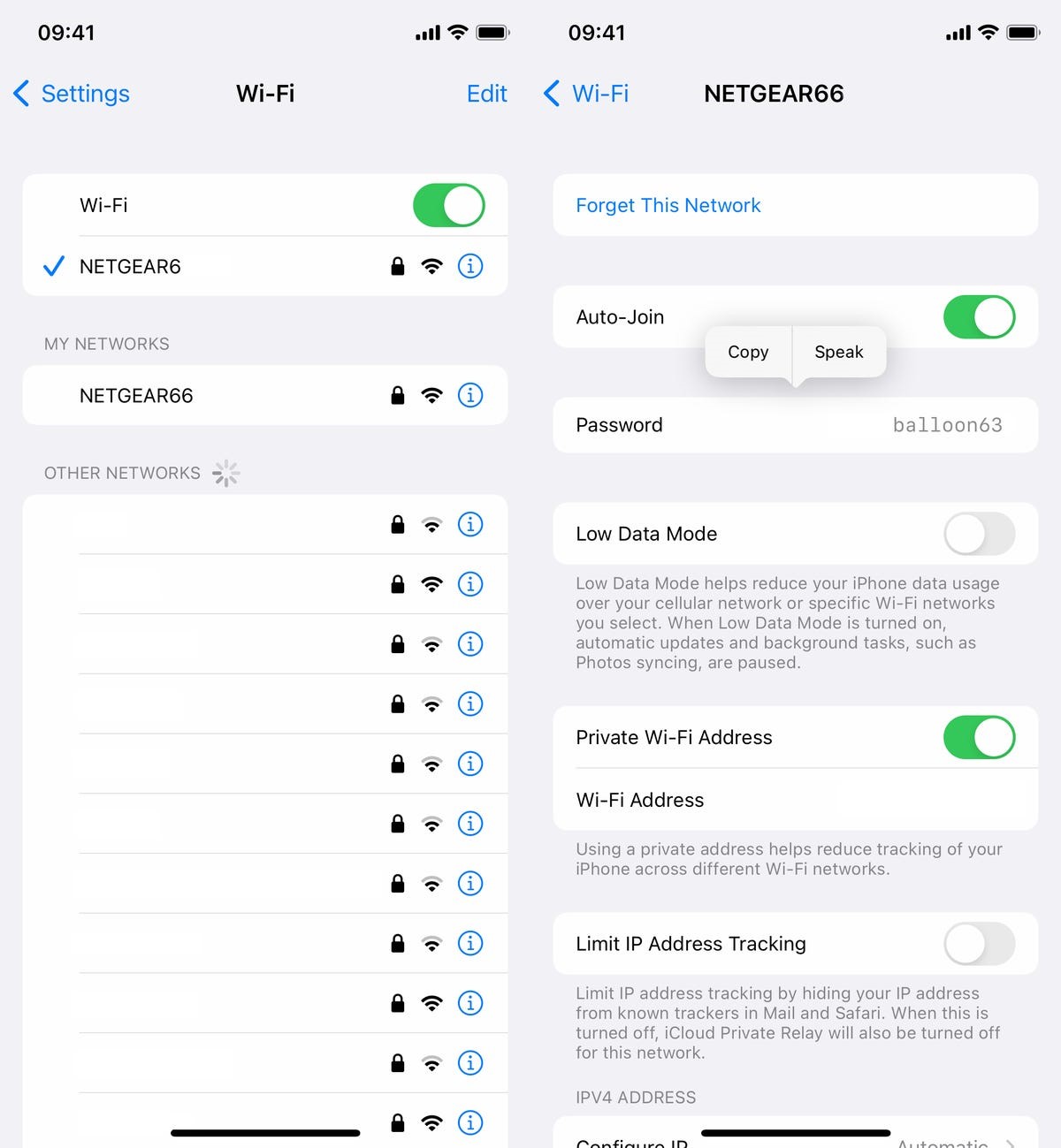 Apple has allowed iOS users to share Wi-Fi passwords for a while now, but only by placing two Apple devices near each other. And if that feature didn't automatically work, you couldn't just dig out the password from your settings. Plus if you wanted to share a saved Wi-Fi password with someone else, like an Android user or someone on a computer, you had to remember the password. Until now.

In Settings, go to Wi-Fi and tap the tiny information icon to the right of the network you want the password for. To view the network password, tap the Password section and then use Face ID or enter your passcode to view it. You can then tap Copy to copy the password into your clipboard and share it.

You can view the password for any Wi-Fi network you've ever connected to, as long as you're currently connected to it or near enough that it appears under My Networks. Maybe you've saved the same photo multiple times or downloaded a video more than once, resulting in duplicates littering up your photo album. It may not be a problem if you've got storage to spare, but you're running out of space, you can now remove every single duplicate easily with iOS 16.

In Photos > Albums, you should see a new Duplicates album under Utilities. Apple scans through all of your photos and shows you any photo or video you've saved more than once in that album. From there, you can either delete any duplicates, or simply press Merge, which will keep the photo with the highest quality (and relevant data) and then move the others to the trash.

Merging will keep the highest quality photo and delete the rest. Although you'll probably want to go through each set of duplicates, to ensure that they're actually exact copies and not similar photos, you can also hit Select > Select All > Merge to remove every single photo and video that Apple thinks is a duplicate, all at once.

4. Copy and paste the photo and video edits 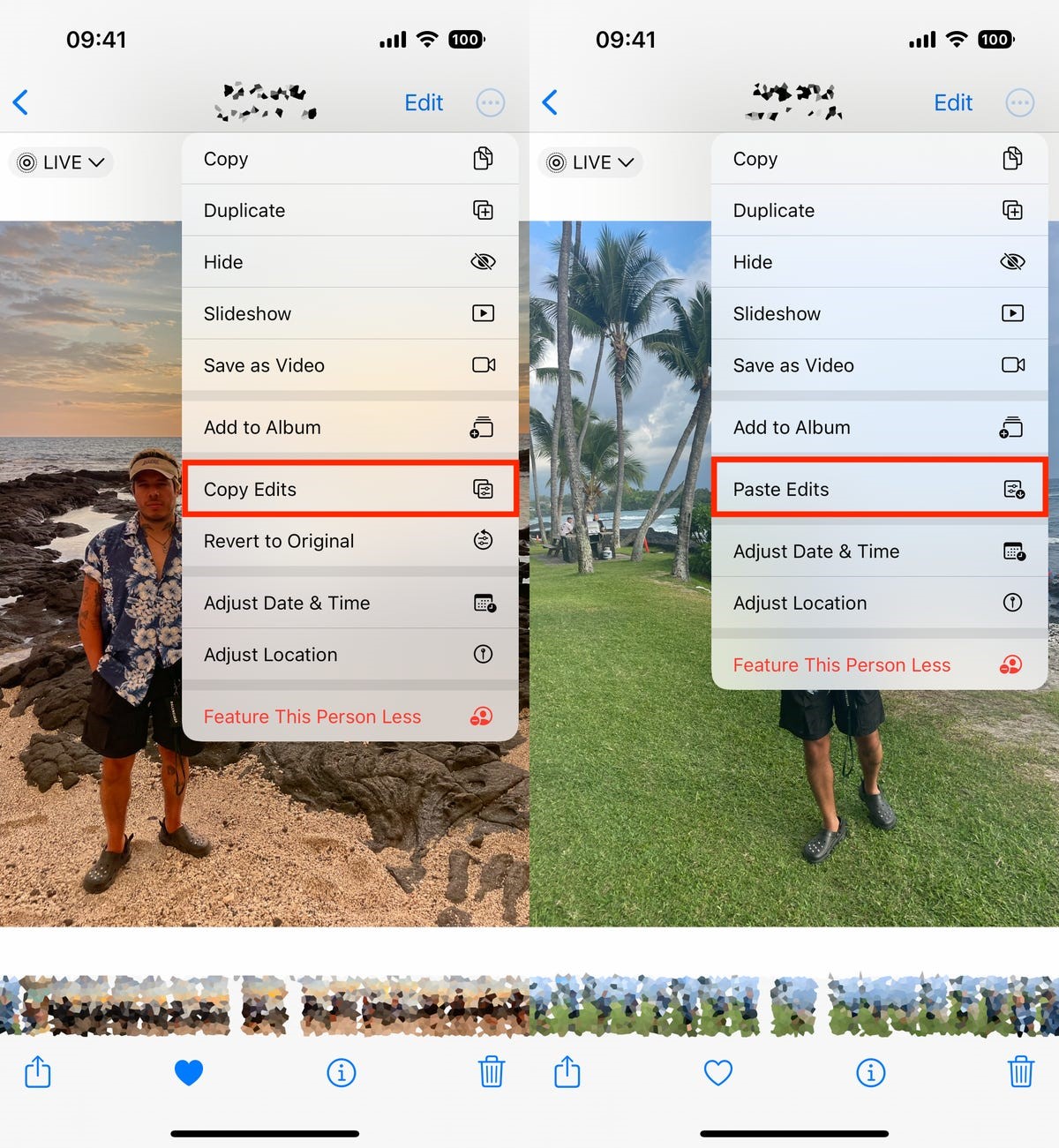 If you use the editor tool in the Photos app, you'll be happy to learn that you can now copy and paste edits, including saturation, contrast and brightness, between photos. If you edit one photo or video and are happy with the look, you can paste those same exact edits to any other photo or video in your camera roll.

To do this, launch the Photos app and open a photo that's been edited in full-screen. Next, tap on the three-dot menu in the top-right corner and then hit Copy Edits. This option will only appear if the photo has been edited within Photos, not any third-party photo editor. Finally, go to the photo you want to copy these edits over to, tap on the three-dot menu and then hit Paste Edits. After a second or so, you should see the photo edits appear.

5. Bring haptic feedback to your keyboard 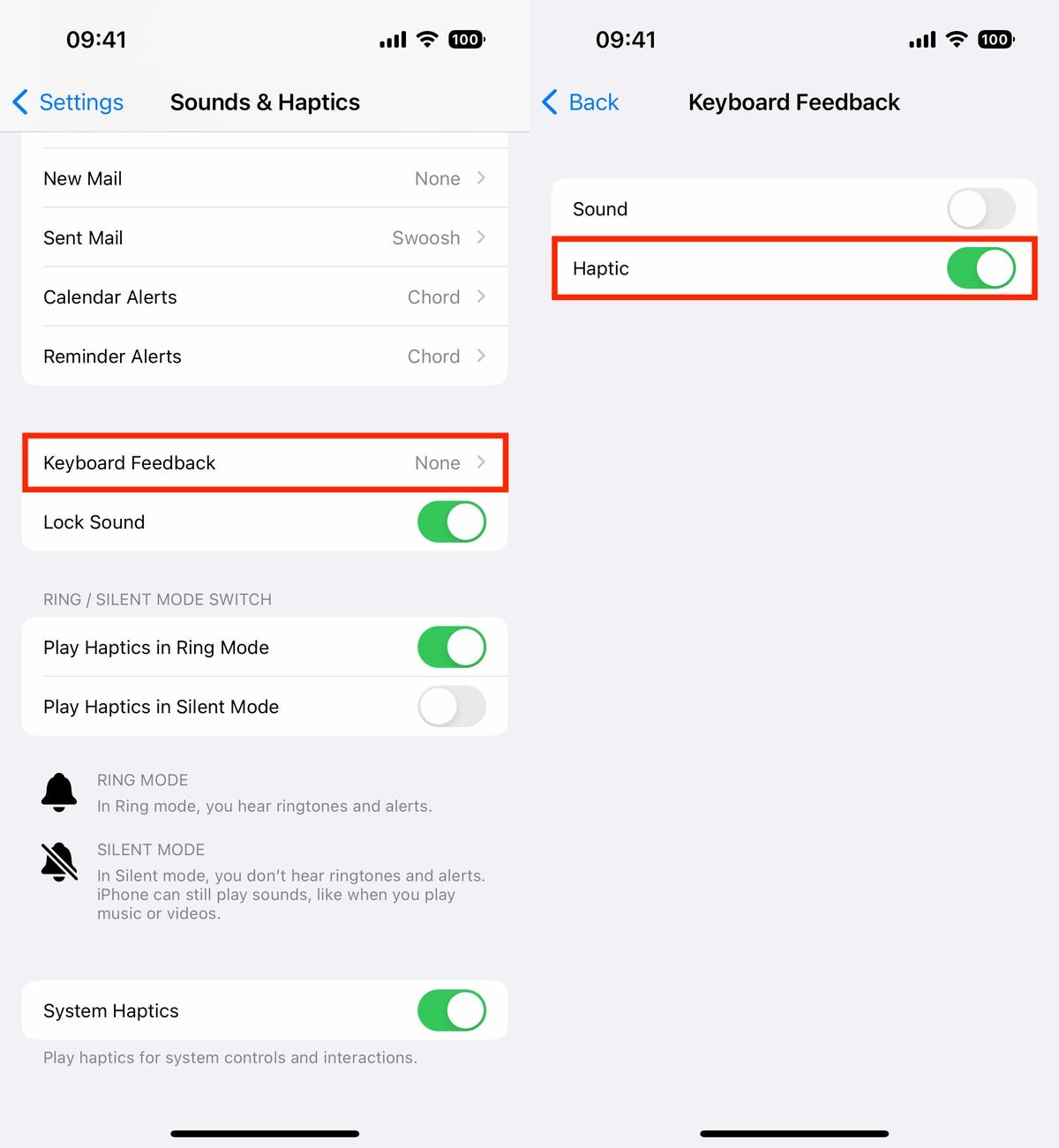 The iPhone has long had haptic feedback. It's what you feel underneath your fingertips whenever you attempt to delete an app from your home screen or enter the incorrect password on your lock screen. Strangely enough, haptic feedback has never been available for the stock iOS keyboard -- until now.

If you want to enable a slight vibration for every single key you type in, go to Settings > Sounds & Haptics > Keyboard Feedback and toggle on Haptic. The sound option you see is the loud and annoying clacking sound you might hear when you type in something and your phone isn't on silent mode, so you can keep that disabled.

Every single time you type, you'll feel a slight vibration for each key you hit.

6. Pin your favorite tabs in Safari 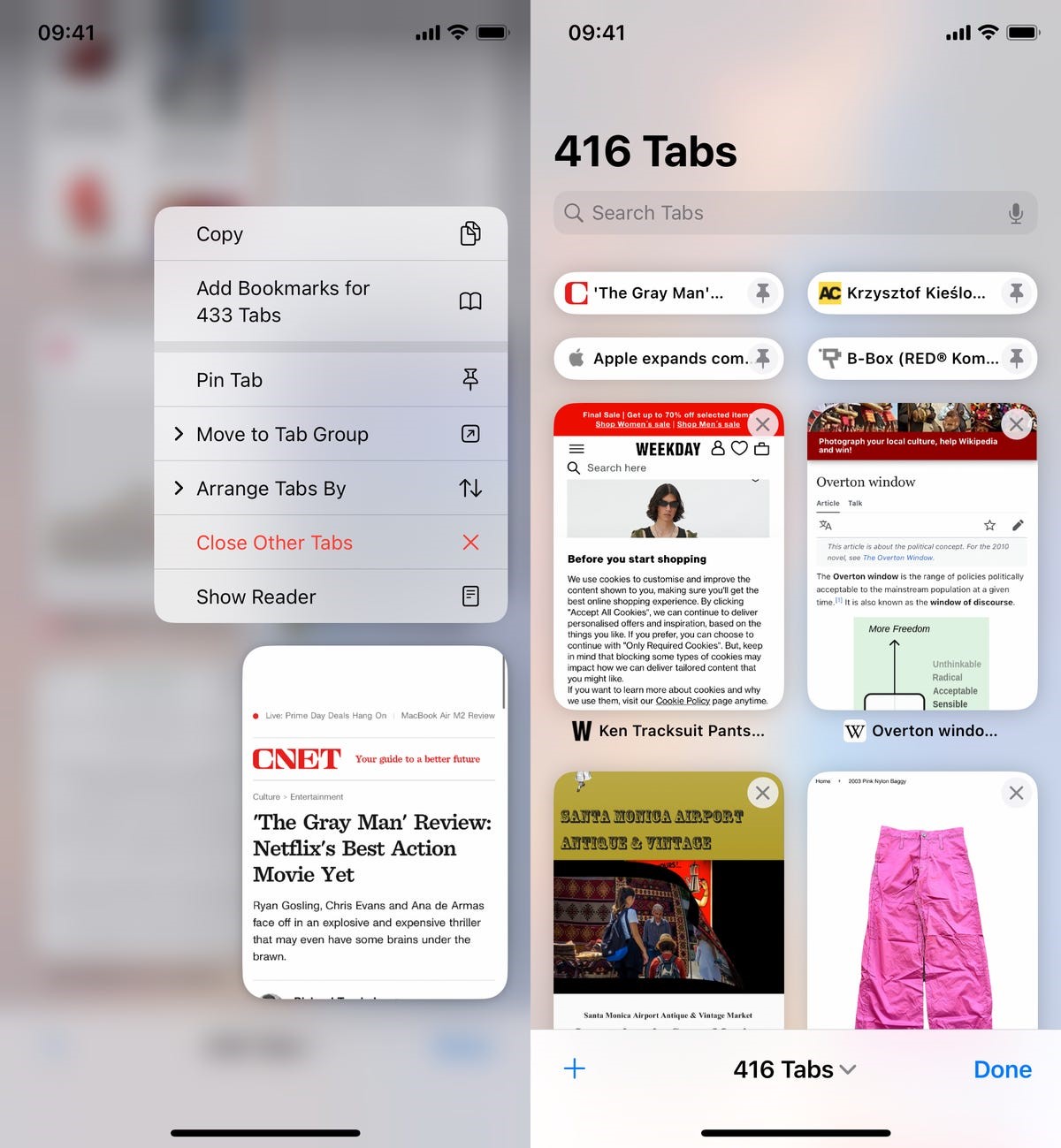 In Safari, if you press down on an open tab, you now have the option to hit Pin Tab. This will move that tab to the top of Safari, where it will exist as a tiny tab preview, permanently pinned there, which you can then tap to view. If you press down and unpin a tab, it will move to first in your grid of open tabs.

For more on iOS 16 and the iPhone, see why some aren't happy with the new battery icon and discover the three things you should do first after installing iOS 16.

If you've read our guide on how to edit photos on iPhone, you'll know that iOS Photos is a powerful application, which lets you perform many edits and alterations to your images. With iOS 16, though, it just got a whole lot more powerful.

You can now undo and redo individual alterations. Previously, you had two undo options. The first was by pressing cancel on the edit menu, thereby undoing every change you made to the image since you last edited it. The second way was by tapping revert, reverting the image back to its original form. They were both blunt instruments and didn't offer the flexibility of simply undoing your last action(s). There was no redo action to undo your undo, either. This is great news for editing, where it's often beneficial to trial and error different adjustments, undoing and redoing them quickly as required.

To undo or redo a change when editing, simply tap the back or forward arrows, top left.|

Similarly, you can now also copy edits from one image to another. This is a feature I use a lot in Adobe Lightroom, so I'm chuffed it's come to iOS. If you have a range of similarly shot, similarly exposed images, you now don't need to edit each one meticulously to match. Instead you just copy your edits and paste to whatever image you like. That'll make editing numerous pictures way faster than before.

I remember the days when it wasn't possible to track a package that had been dispatched to you. Nowadays, parcel tracking is getting better and better, with individual delivery companies sometimes offering excellent apps which allow you to GPS monitor the live location of your parcel. The thing is, you may still need to use various apps or websites for different parcels. Well, Apple want to make that easier.

In iOS 16, you can track parcels directly from your Apple Wallet... if you've purchased using an Apple Wallet card through a participating merchant, that is. That means potentially all of your tracking info will be in the same place. Very handy.

Some of our favorite iPhone features of the past have been accessibility features. Not only are these designed to solve specific problems for those with particular accessibility requirements, they're also often incredibly cool and useful even if you don't actually need them for full use of your device. The new iOS Live Captions feature is no different. Essentially, with this feature turned on, your iPhone will display on screen subtitles for audio in real time. This is a really great device for the deaf, those with hearing impairments, or for those who, like me, have someone in their family that experiences difficulty hearing.

Currently iOS Live Captions is in beta, and doesn't appear to be available outside of the U.S.

Apple are getting super serious about the integration between devices in their ecosystem. Any user of multiple Apple products will know the benefits of the seamless integration we have so far, from AirDrop to seamless syncing and Universal Control. Now, Apple are granting us yet another integration feature: Control Nearby Devices, which does as it says: lets you control other nearby Apple devices from your iPhone, as long as they're logged in to the same iCloud account. You can't control everything on the device, of course, but do have access to a few functions that'll come in super handy, like starting and stopping media or talking to Siri. It's another example of an accessibility feature, this time seemingly to aid those with mobility issues, which is also super useful to others too.

Ever tried deleting a contact before iOS 16? It was a bit of a pain, involving going into the contact's card and deleting from the edit menu. Well, now you can delete people much more simply from your list of contacts. It's not revolutionary, but certainly speeds up getting rid of people you don't like, or whose details you no longer need.

Do the iPhone and Apple Watch really need more integration? Yes. The more the better. With iOS 16, users of Apple Watch 6 and newer will be able to mirror and control their Apple Watch on their iPhone screen, as long as that iPhone is signed in to the same iCloud account. It's another accessibility feature designed to allow the Apple Watch to be controlled on a much bigger screen than the watch face.

Apple Watch Mirroring is an iOS 16 and watchOS 9 feature, so you'll need to know how to update your Apple Watch and then ensure yours is updated to watchOS 9.

We really love the new features Apple has packed into iOS 16. If you'd like to learn about even more of the great new functionalities of your iPhone, check out how to use the haptic keyboard in iPhone and how to turn on the battery percentage icon on iPhone.