Check out the Apple’s new patents for iPhone

The invention is meant to help assist the user in the case of automobile accidents, muggings, and debilitating medical issues, among other scenarios. Apple patent filing describing a unique mobile device feature that can automatically request assistance if it is determined that a user is in distress.

An interesting addition is that these bumper cushions can also help prevent water damage: Since these cushions are placed strategically at the iPhone’s four corners, combined with the accompanying support structures, they can act as water rings. For example, when this mode is engaged, a user may need to touch the screen or press a button every half hour.

Most modes monitor user interaction. Examples would be a finger breaking contact with the device screen or not moving for a given period of time. In other cases, the system utilizes onboard sensors like an accelerometer or microphone. For example, the device monitors for sudden movements or loud noises surpassing a certain threshold. 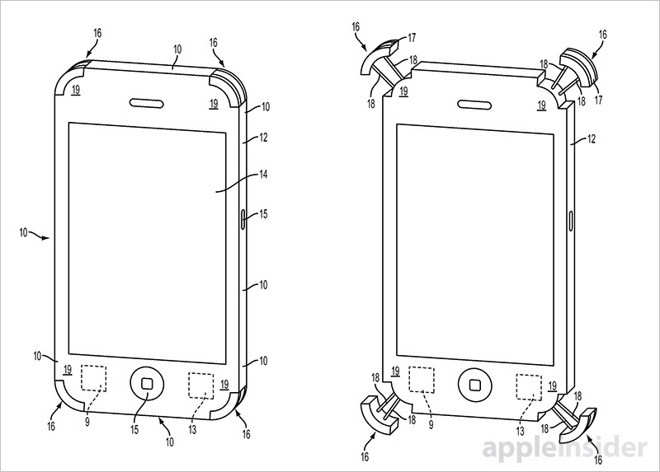 Apple has patented an iPhone security system that automatically deploys shock absorbers when the device’s built-in sensors detect a potential impact. Following a patent that describes an automated screen protector.

When that happens, the patent system triggers spring-loaded shock absorbers, which are part of the device housing. These protectors can be made of foam, plastic, rubber, or another suitable material.

Someday, the iPhone will be hard to crack, as Apple is working on various systems to protect the device that accounts for the majority of its revenue. The whole protection system sounds interesting, and it would be great to have such protection on the iPhone. However, don’t expect it anytime soon.

The document points out that an iPhone might be able to float above a liquid’s surface, though such a scenario would require a perfect combination of bumper support structure extension, positive inherent buoyancy, and device orientation. It should be noted that the shock absorber system does not need to deploy in order to function as a float. 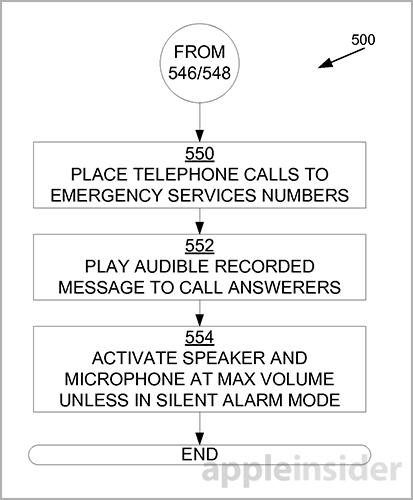 The system can then automatically request help via cellphone call or another mode of communication. In yet another example, a user can depress a physical button like volume up/down, which then acts as a "dead man switch." If the button is released, the system will determine something has gone wrong.

GPS and an accelerometer to determine speed, quick stops, or crashes, among other events. The filing describes a system that uses a mobile device's onboard sensors to detect a probable emergency situation, such as a physical attack against the user.

The emergency response procedure is also similar to the attack detection mode in that alarm sounds and calls to appropriate parties are made. The failsafe mode is useful to those who may suffer an unexpected emergency due to a medical condition. Alternatively, a disarm code can be entered to turn return back to attack monitoring.

Users may also initiate the response mode manually by shaking the device or performing some other predefined gesture. The alarm or response alert can be disabled via an on-screen keypad. In one embodiment, the system revolves around a user-enabled "attack detection mode" that, when activated, monitors for certain events.

It is unclear if Apple will deploy the proposed system in a future version of iOS, though with iPhone theft being a major issue in some areas, such a feature may be worth implementing.

MediaTek seeks to win the race of 4nm SoC processors