Samsung held its Galaxy Unpacked 2021 event yesterday and revealed a number of products that will be available to users for purchase. The star of the event was its top-of-the-line Samsung Galaxy Z Fold 3 smartphone. Samsung unveiled the specs of the smartphone during the event.

The foldable smartphone will come with a flexible 7.6-inch Dynamic AMOLED 2X display. The display will have a resolution of 2208×1768 pixels and will be protected by Corning Gorilla Glass Victus and the screen itself will be raised slightly so that no damage comes to it when it's folded. The smartphone dimension is revealed to be 158.2×128.1×6.4 mm in the unfolded state, and when folded, the thickness of the case will increase to 14.4 mm, and the width will decrease to 67.1 mm. There is a secondary screen present with a size of 6.2-inch with a refresh rate of 120Hz and a resolution of 2260×832 pixels and also comes with Corning Gorilla Glass Victus protection.

The smartphone will have a Snapdragon 888 chipset as a brain and will come with 12GB of RAM and 256/512 GB of internal storage. The smartphone will come with a massive battery of 4400 mAh, which is not so big in comparison to its size. Samsung Galaxy Z Fold 3 will also come with stereo speakers with Dolby Atmos and will support NFC and S Pen stylus, 4 MP selfie under the display camera with an aperture of f / 1.8, and a triple rear camera with 12 MP resolution for each sensor. There is another 10-megapixel front camera on the outside. 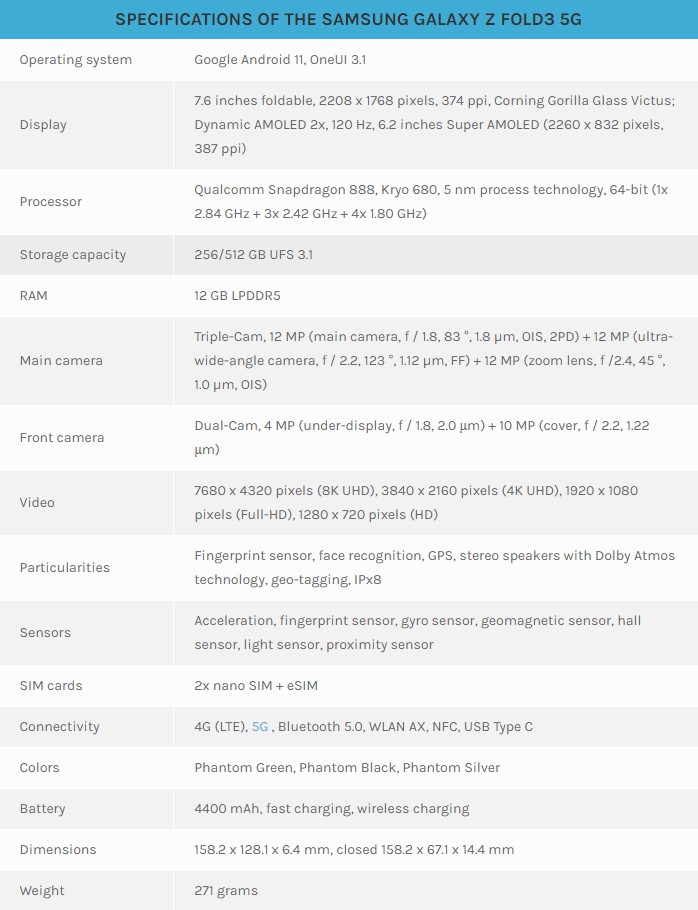