The Google Pixel 7 series has recently made its way to the global market with the Pixel 7 and Pixel 7 Pro launch. Fans and reviewers loved both smartphones for their top-end camera performance. However, the company is now shifting focus to the mid-range segment phones, and reports about the WIP of Google Pixel 7a have already started popping up on the internet.

Nothing has officially been confirmed about this handset just yet, but it’s likely coming and we have some idea of what to expect; based on early leaks coupled with what we know about the Pixel 7 and past models. The same source has elsewhere claimed(opens in new tab) there's a Pixel phone in the works with a ceramic body, and while they describe this device as a flagship, they also mention a camera arrangement that 9to5Google(opens in new tab) has linked to a phone it believes to be the Pixel 7a.

This device has the codename 'Lynx', and apparently has a 50MP primary sensor, a 64MP telephoto one, and a 13MP ultra-wide camera, which would also be used on the front.

Google hasn’t been entirely consistent with its A-model launches, as while the Pixel 6a was announced in May 2022 and shipped in July, the previous two models launched in August of their respective release years. Still, we’d think that May 2023 is probably the earliest we’ll see the Pixel 7a, and it might well ship later, even if it’s announced.

That said, there has been a mention of the Google Pixel 7a on Amazon. There isn't much to go off, but it's another indication that the mid-ranger is indeed on the way in 2023, and could mean it will land before the middle of the year. There aren’t any price rumors, but given that the Pixel 7 costs the same amount as the Pixel 6, Google may well price the Pixel 7a the same as the Pixel 6a. That would mean a price of $449 / £399 / AU$749.

Google Pixel 7a news and leaks

So far there aren't many leaks around the Pixel 7a. One that we have come across is courtesy of Digital Chat Station, who’s a fairly reliable leaker. They claim – via machine translation – that Google is working on a small-screen flagship codenamed 'Neila', which has a flat display, a single-lens punch-hole camera, and a design similar to other recent Pixels.

That doesn’t give us much to go on, and there’s a chance they’re not even referring to the Pixel 7a – since they don’t use that name and they describe it as a flagship – but we’d otherwise expect the phone to fit that description. It's likely to have an aluminum camera bar, like the Pixel 7, and a generally similar look, along with the Tensor G2 chipset offered by that phone. Beyond that though, we’re not sure what to expect.

What we want to see 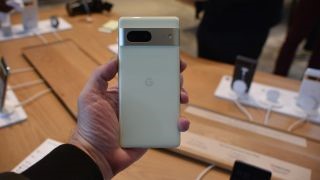 There are five key things Google can do that would make the Pixel 7a significantly better than the Pixel 6a. Here are our must-haves if Google wants to ensure 7a success:

The Pixel 6a is stuck with a 60Hz refresh rate, which even for an affordable phone feels rather dated these days. We don’t expect 120Hz from the Google Pixel 7a, but a boost to 90Hz would be much appreciated. That said, that would bring it in line with the standard Pixel 7, in terms of refresh rate, so Google might be disinclined to do this, so that the phones are better differentiated.

The last few Pixel A-line generations all have the same 12.2MP main camera (also used by the numbered Pixels preceding the Pixel 6), and while it’s a reasonable snapper, it’s overdue an upgrade. Google is using a much better 50MP camera on the more recent flagship Pixel phones, so an upgrade to that here would be nice to see. Though, as with an increased refresh rate, that could bring the Pixel 7a too close to the Pixel 7 for Google’s liking, so don’t count on it. There are a vast array of other sensors out there to consider, however, and a lot of range between 12.2 and 50MP for Google to consider that would better set the 7a apart from its predecessor in the camera department.

In our Google Pixel 6a review we found that the phone struggled to last through a full day of use, which is the minimum we expect from our smartphones. So for the Pixel 7a we really want to see an improvement. The good news is that an improvement is likely, as the phone will probably use the Tensor G2 chipset, which is more efficient than the original Tensor in the Pixel 6a.

At just 18W, the Pixel 6a certainly doesn’t charge fast. Even the Pixel 7 and Pixel 7 Pro aren’t among the speediest chargers, but with support for 30W, they’re at least more reasonable, and that’s an upgrade we’d like to see offered on the Pixel 7a as well. We’d say there’s a middling chance that will happen. It’s not a big enough feature for Google to necessarily want to keep it for the flagships, but it could also push the price up, which the company will likely be trying to avoid.

Speaking of the price, for the specs on offer the Pixel 6a was a bit too expensive, especially as it landed so long after the Pixel 6 that price drops meant you could sometimes get that phone for a similar price.

Additionally, the Pixel 7a is expected to ship with 5W wireless charging support, and the handset is tipped to ship with a starting price tag of Rs 45,000. Besides, there is little information about the upcoming Pixel 7a, but we can expect more leaks and rumors to appear on the internet moving forward.