However, there are still many games that require less storage space on your phone and can even run without an internet connection. As mobile games are getting better each year, their storage requirements are also becoming more demanding.

Here are six of the best smartphone android games of 2020 that you can enjoy:

It’s a two-sided story, both sides eyeing the same loot & that’s where the action lies. You team up with your crew in a 5v5 Heist Mode to experience some adrenaline-pumping matches. Each player enters as a solo competition to transfer the largest virtual sum to his account in the game. With every other player as an opponent, you got to pick between surviving or risking to loot it all. Fast-paced yet action-packed; the biggest stealer wins.

The USP every match is different & unique since you never know what strategy your opponent has got running against you; so either you have to ace from the very beginning or try hard catching up. Battle with your crew or go solo to experience other game modes because playing is much easier than mastering. With 8 specialists to unlock & a fully loaded store; you have the opportunity to reach the ROGUE level
A unique Heist Mode where both the teams are vying for the same objective in a series of events to come out as a winner. Strategy & teamwork are the most sought-after skills for this mode.

It’s the all guns out mode. Vengeance may be; your gang Vs the opponent gang. The competition to either have more kills after a timer of 7 minutes ends or reach a total of 50 kills first; wins. From settings enable Gyro and you can customize 3 types of gyro sensitivity. We are constantly improving the gyro controls with your feedback. In Game Mailbox for latest updates and periodic rewards with Spawn collision causing jump fixed. Character speed improvement, lot of other bugs crushed & UI issues on minimizing game/lock screen solved.

2. Indian Air Force: A Cut Above

The Indian Air Force prides itself to put in its regular service the most advanced and cutting-edge technologies in aviation, space & information technology. It is an early adopter of new and emergent tech and demonstrates its leadership in implementing the nation’s policy objectives.
In line with the Digital India initiative, the IAF has taken landmark steps like Online Tests for IAF recruitment, and an interactive mobile game to showcase the life of an IAF pilot.

The official mobile gaming application of the IAF will allow an aspirant to experience firsthand the roles of an IAF air warrior, as well as means to apply and appear for recruitment from the comfort of his/her mobile phone.
The gaming application will have various features, including offline single-player missions, an online multiplayer, and a career navigator information section as well as augmented reality features.

Single-player missions will be based on an engaging narrative, allowing the player to fly a wide arsenal of IAF’s aircraft assets. The player will be taught how to handle a high-performance aircraft via a tutorial mission – at the end of which, the player will earn his/her wings.10 engaging and high action missions will follow, which will allow the user to experience air power of the IAF, in the form of its response, reach, precision, and flexibility, including support to other arms of the Indian Military, as well as aid to civil authorities in the form of Humanitarian Assistance and Disaster Relief. The user will also learn about the IAF’s weapons and tactics, and how IAF’s new acquisitions will help in realizing the IAF’s future strategy.

The mobile gaming application will include an online multiplayer, where players can engage with other like-minded players over the internet. Multiplayer game will have two modes – a squad vs squad where players team up, and a free for all, where the last man standing will be the winner.
The user will have the option of using long-range missiles that go beyond visual range, as well as the ability to go head-on against other players in dogfight mode.

Let’s salute to “THE GREAT Chatrapati Shivaji Maharaj (Shivaji Bhosale ) and Sambhaji (Sambhaji Bhosale) Maharaj and all his Mavale’s, who fought for “Swarajya” and even scarified their life for “Swarajya”. Inspired by historical events and characters, this work of fiction was designed, developed and produced with no intention to hurt or disrespect anyone’s religion or culture.

Our main intention behind this 'App' is to present our precious Heroes, Warriors, their sacrifices, legends in an appealing and interactive way which will be helpful to generate interest in young and upcoming generations.

Ninja Fun Race is a live, multiplayer racing game featuring unique Ninja Characters. You'll race against three real people, including your Facebook friends and random opponents. The action is real-time. Jump over obstacles to overtake your opponents. Shoot rockets, portals & throwing stars at players ahead of you to knock them back. Drop punch boxes to slow competitors behind you. Outfit your character in Ninja Garbs and other fun costumes. Join a league and climb the leader boards. Race real people, Compete in real-time, See Facebook friends, Grab awesome powerups, Jump, then double jump & Customize your costume. Taunt other players 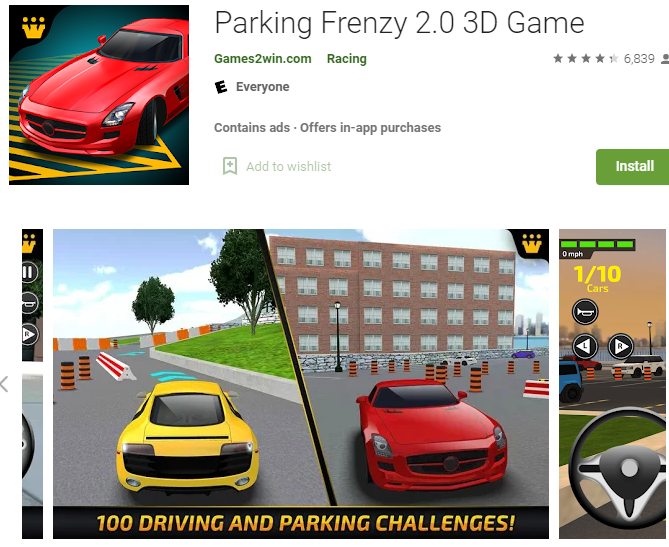 Fasten your seatbelts as here comes another awesome innovation from the makers of a super-hit game, Parking Frenzy 2.0 3D Game.

Drive through narrow lanes & obstacles, beat crazy drivers, and reach your parking spot just in time! Put your parking skills to test as you navigate through the city. Remember to complete all achievements by completing the Challenges Mode. With 75 levels of City Driving and 25 Challenges, along with 15 different cars - it’s surely going to be a ride to remember. So, get ready to adjust the camera, navigate carefully, and park precisely.

WCC3 is a brand-new way to play mobile cricket. The most realistic cricket game on a phone! We will constantly add new features and tweak the game to make it the best mobile cricket gaming experience you can have anywhere.

Advance your cricket journey as a player with humble beginnings, through the domestic, league, and international matches. Play over 400 matches, spanning 25 series across 3 brackets. Show your mettle across formats as a consummate player.
Enjoy stunning visual cutscenes that convey your story contextually at every stage. Make tactical decisions in match selection, gear choices, and ability upgrades to achieve your goals.

Fielder controls for the first time! Make unbelievable dive stops, catches, direct hits, and athletic throws. It's all in your hands. Customize your playstyle with multiple camera and control options. Manage your players’ Stamina and Focus levels. Get right into the action for a holistic mobile cricketing experience. Let's build a brand-new cricket game that thrills, challenges, and rewards you in the best possible way

The following are some of the benefits of playing games.

Do you really worth it?

Why you should set aside time to play these coding games and challenges. Not only do they serve as fun breaks, but you’ll learn faster and retain more info thanks to the hands-on practice and experience. While a coding game alone probably isn’t going to teach you everything you need to know about coding, these free fun games can be a really incredible way to practice the skills you’re learning.

How To Enable DNS Over HTTPS In Chrome, Firefox, Edge, Brave & More?