Online learning has come a long way in the last few years. There are interactive courses, tons of online tutorials, and one of my personal favorite ways to practice coding: fun free games.

The following are some of the benefits of playing games.

I had listed the top 10 games that will enhance & improve your programming skills : 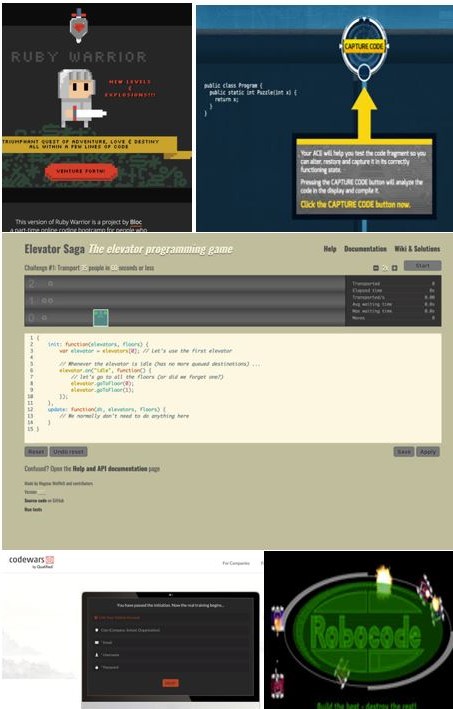 CodinGame is a technology company editing an online platform for developers, allowing them to play with programming with increasingly difficult puzzles, to learn to code better with an online programming application supporting twenty-five programming languages, and to compete in multiplayer programming contests involving timed artificial intelligence, or code-golf challenges. CodinGame's business model is based on sponsoring by companies wanting to get in touch with developers. CodinGame helps these company to recruit developers through worldwide contests hosted every three months or private hackathons. The startup was also seeded through several fundraisings in 2013 and 2015. CodinGame for Work sells also turnkey tech screening solution to help companies assess the level of their programmer candidates through coding tests.

CodeMonkey is a fun and educational game-based environment where kids learn to code without any prior experience. After completing CodeMonkey's award-winning coding courses, kids will be able to navigate through the programming world with a sense of confidence and accomplishment. CodeMonkey teaches coding using CoffeeScript, a real programming language, to teach you to build your own games in HTML5. It’s aimed at coding for kids, but it’s definitely fun for adults, too.

It has a simple interface that teaches you the basics of how things align in flexbox while you help Froggy and his friends. Flexbox Froggy, a game where you help Froggy and friends by writing CSS code! Guide this frog to the lilypad on the right by using the justify-content property, which aligns items horizontally and accepts the following values:

Flexbox Defense is another great way to practice your flexbox skills. This time, you’ll move gun towers into position along a path to defeat oncoming waves of enemies, using the same kinds of commands as Flexbox Froggy. Flexbox Defense is an online application, which teaches the Flexbox Layout Module in a playful way. The user is able to play through 12 levels while his job is to position towers using CSS and Flexbox to counter incoming enemies.

CodeCombat is aimed at teachers and students, but anyone can play. Learn Python, JavaScript, CoffeeScript, or the Lua game scripting language. On the beginner Dungeon level, you’ll move your Hero through the game using some basic commands according to the tutorial alongside the game. CodeCombat is an educational video game for learning software programming concepts and languages. Students learn to type coding languages like JavaScript, Python, HTML, and CoffeeScript, as well as learning the fundamentals of computer science.

A triumphant quest of adventure, love & destiny. all within a few lines of code. venture forth! This version of Ruby Warrior is a project by Bloc. a part-time online coding boot camp for people who want to keep their current job, learn how to code, and become a full-time software developer

Code Hunt is a serious gaming platform for coding contests and practicing programming skills. It is based on the symbolic white box execution engine, Pex. Code Hunt is unique as an online coding platform in that each puzzle is presented with test cases only, with no specification. Players have to first work out the pattern and then code the answer. Code Hunt has been used by over 350,000 players as of August 2016. Data from the recent contests have been open-sourced for analysis in the educational community. Code Hunt teaches you coding in a unique way. To play, you identify code fragments, analyze them, modify code to match the fragments, and then capture the working code fragment. You can use it to learn Java or C#.

Elevator Saga tests your JavaScript knowledge with challenges related to moving an elevator and transporting people in the most efficient manner possible. It starts out with a challenge to move 15 people in less than a minute, with challenges getting progressively harder from there.

Code Wars helps you improve your skills by training in challenges with others. They offer a huge variety of languages, including JavaScript, Swift, PHP, Python, Ruby, and Haskell. You’ll have to prove your skills first with a basic test of your understanding of the language you want to practice. Codewars is an educational community for computer programming. On the platform, software developers trained on programming challenges known as kata. These discrete programming exercises train a range of skills in a variety of programming languages and are completed within an online integrated development environment. On Codewars the community and challenge progression is gamified, with users earning ranks and honor for completing kata, contributing kata, and quality solutions.

Do you really worth it?

Why you should set aside time to play these coding games and challenges. Not only do they serve as fun breaks, but you’ll learn faster and retain more info thanks to the hands-on practice and experience. While a coding game alone probably isn’t going to teach you everything you need to know about coding, these free fun games can be a really incredible way to practice the skills you’re learning.