According to the Geekbench listing, the M2 chipset will have a 12-core CPU and 96GB of RAM. Besides, the upcoming chipset scored 1,853 in single-core and 13,855 in multi-core performance tests.

Apple seems to be working on several new Macs that will likely be released in 2023. It includes an updated iMac, next-gen MacBook Pros and the long-rumoured Mac Pro with Apple silicon. The Cupertino giant announced the M2 chipset in June 2022, and now the company is working on its enhanced version.

Whether the company will use the same 5nm node used in the current M2 chipset or the rumoured 3nm architecture for the upcoming processor is unknown. The rumoured 3nm node is expected to enhance performance and energy efficiency.

As per the report, the Geekbench results of the Apple M2 Max chipset were first spotted on Twitter. The result reveals that the upcoming chipset has a 12-core CPU and 96GB of memory. The tweet including the results also had an identifier "Mac14,6," which could either indicate the upcoming MacBook Pros or the next-generation Mac Studio 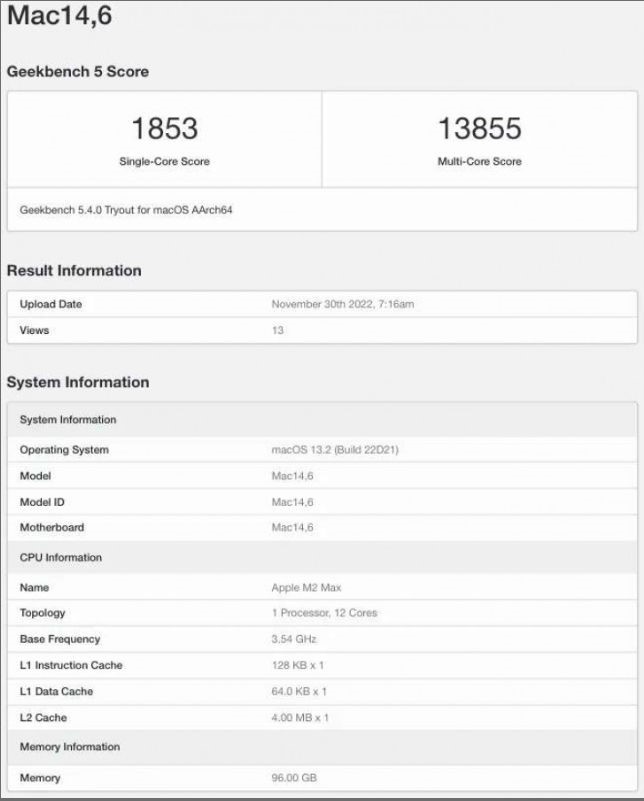 The scores suggest the M2 Max chip is only about 14% faster than its predecessor. This indicates the alleged M2 Max will not actually be a huge upgrade over the M1 Max. However, it is also possible that Geekbench failed to accurately measure the chip’s performance.

The forthcoming M2 Max chipset is expected to power new 14-inch and 16-inch MacBook Pros which are expected to arrive in 2023, and the ‌Mac Studio ‌, which is likely to come later next year.

To recall, Apple introduced the base M2 chip earlier this year. It powers the new MacBook Air and offers impressive performance and speed.  It is built on the 5-nanometer process node and has 8 cores divided into four performance cores and four power-efficiency cores. It supports up to 24 GB of LPDDR5-6400 memory and has a bandwidth of up to 100GB/s.