Sony is one of the few firms that have made a name for itself in the video game console sector. However, the Japanese firm no longer wishes to rely on a single market. It revealed future ambitions during the most recent investor presentation. By 2025, half of Sony's games will be available on PC or mobile, according to the slides. "By expanding to PC and mobile, as well as... live services," said Sony Interactive Entertainment president Jim Ryan, "we have the opportunity to shift from a scenario where we are present in a relatively narrow slice of the entire game software market to being present pretty much everywhere."

This appears to be reasonable. Sony has a large number of games that are popular among gamers. As a result, diversifying their market to include not only game consoles but also PC, mobile, and live gaming services should result in overall growth. According to Sony, the number of people who play Sony games will considerably increase. More individuals will spend money on Sony games as a result of this, resulting in increased revenue for the corporation. It's one thing to produce games for consoles only; it's quite another to bring such games to the PC and mobile platforms.

WHY SWITCH FROM GAME CONSOLES TO MORE VERSATILE DEVICES?

Sony's decision isn't arbitrary. Bringing games like Horizon Zero Dawn, Days Gone, and God of War to PC has already benefitted the company. Net sales were $80 million last year, and they are expected to reach $300 million in 2022. In any case, this isn't the first time Sony has mentioned its intention to exit the game console business entirely. It has already established a PlayStation PC label and has even secured a PC port developer. 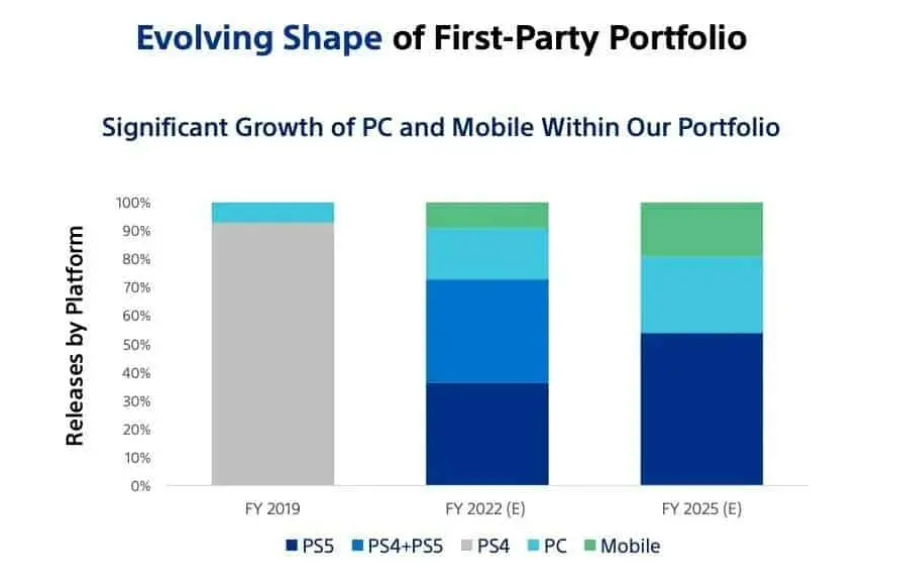 Apart from concentrating on the PC, Sony is also attempting to succeed in the mobile market. Nicola Sebastiani, the former content director of Apple Arcade, had been hired by the company. He is in charge of PlayStation Studios' mobile strategy. Sony demonstrated on the slides that it will launch mobile games in a variety of methods. According to reports, the company would collaborate on titles with existing mobile developers and form its own studio network.

By 2025, Sony expects to have 12 live service franchises in operation. The first will be available later this year.
Finally, Sony will transition its games from game consoles to more versatile devices like PC and mobile.