The global launch of the Poco F4 GT smartphone is set for next week, and many assume it to be a rebadged version of the Redmi K50G smartphone that debuted in China.

The Poco F4 GT smartphone will be released on April 26 in India, after which it will be released globally. The next Poco F series handset is rumoured to come with a top-of-the-line Snapdragon CPU, as well as support for 120W fast charging.

According to multiple sources, the Poco F4 GT will be a rebranded Redmi K50G gaming smartphone. Given that the Poco F3 GT was nothing more than a rebadged Redmi K40. If this is the case, customers may expect the Poco F4 GT to be a powerful gadget. 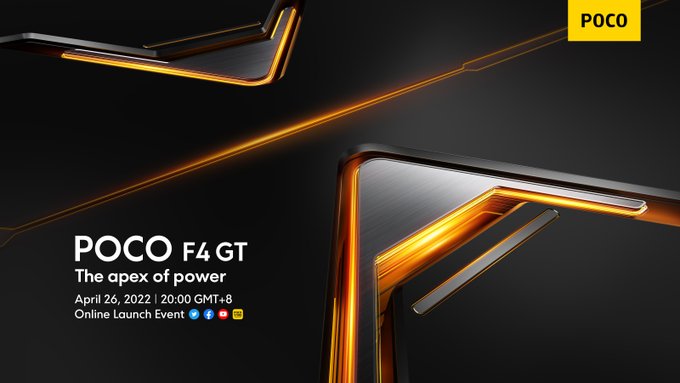 Poco F4 GT is likely to be powered by the flagship Snapdragon 8 Gen 1 chipset, with up to 12GB RAM and 256GB storage that might not expand further thanks to UFS 3.1 technology. It could be one of the first smartphones to come with the Android 12-based MIUI 13 version in the market.

Poco F4 GT could have a triple rear camera setup that consists of a 64-megapixel primary sensor, an 8-megapixel ultra-wide-angle sensor and a 2-megapixel macro sensor.

A 6.67-inch AMOLED display with Full HD+ resolution and a 120Hz refresh rate is believed to be included in the phone.
Like the Xiaomi 11i HyperCharge and the Xiaomi 11T Pro, the Poco F4 GT could sport a 4,700mAh battery that enables 120W wired fast charging.