JioMeet: A Better Alternative for Zoom?

Jio has rolled out it's own video conferencing app called Jio Meet. Amid the COVID-19 crisis and lockdown nationwide there has been a surge in demand for video conferencing apps. Google Meet, Microsoft Teams and most importantly ZOOM have witnessed a landslide increase in users as Businesses and Students are using these to congregate thus replacing offline hangout places. Jio has decided not to miss such a great opportunity and want a piece of the pie for itself. When there has been a great uproar due to security reasons on ZOOM, and a demand for a better and secure video conferencing app, Jio wants to stomp the market while the iron is hot. Jio launched it's app for android as well as ios on Google Play Store and ios App Store.

Jio Meet allows you to place HD video calls to your friends or colleagues for free. You can sign up for this app via your email or log in through the of OTP. There’s also the option to join a video call as a guest using the conference link sent to you. It will only require a meeting ID and your name. 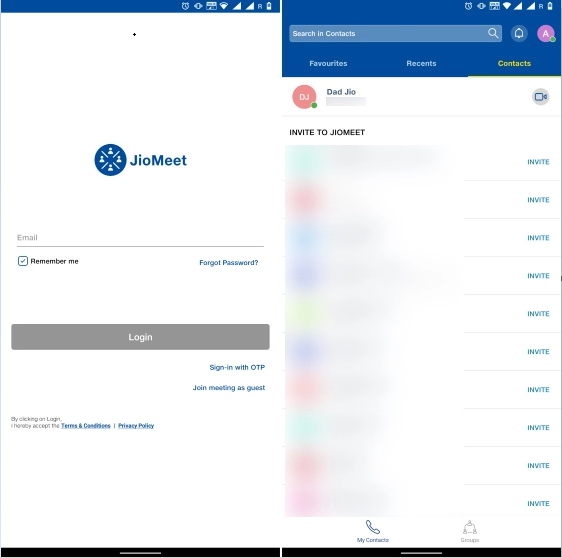 Once logged in, we see that the UI for the app display page is split in three tabs– Favorites, Recents, and Contacts. If you want to start a video call, just tap the ‘video call’ icon next to the name of the user. The call quality automatically adapts with the internet connection quality with the maximum call quality is set at 720p.You can even exchange texts in an overlay over the video call.

JioMeet also makes it super easy to start group calls and what’s exciting here is that it offers some basic admin tools to the host. The host can mute or kill the video feeds of any of the participants. They can also choose to kick any participant or end the meeting for everyone with the tap of a button. Even though some may think that this feature is trivial but this can help in handling nuisance on the conference call.

Now we must address the elephant in the room that is what is the participant limit on JioMeet. JioMeet supports upto 5 participants, yes you heard it right. JioMeet does support up to 5 participants but thats only for free users. If you are a Business user or sign up for a Pro Plan, you can invite upto 100 participant for the conference call.

All meetings are PIN protected, as mentioned by the company.Unlike WhatsApp’s end-to-end encrypted video calls, JioMeet uses SSL 128-bit encryption to ensure the security of your calls. This means your calls are encrypted in transit. JioMeet brings a Conference History feature in tow as well. This means that you can view and listen to old video calls if needed.

According to me the app might still be in it's developing phase. One of the app's many concerns are it's lacky UI design and choopy speed. Whenever a user recieves a call from the app, it is shown as a banner and not as a fullscreen UI. We will go to the full screen UI once we click on the banner. Even though it ensures that the app won't distract the user if he or she doesn't want to accept the call but this can also lead to a situation where the user will miss the call.

The app also takes a considerate amount of time to connect a user to the call. It takes upto 4-5 seconds for a invitee to pop in. The app also faces some audio quality issues.

The belief that the app is still in developing phase and needs some final touch up has been further prooved by the fact that Jio rescinded the app from Play Store. Now if we search for the app there is "Item not found" error. It is now believed that the maker was just testing the app for it's reach and monitoring user feedback for further improvement. The app garnered over 100 thousand installs on the Play Store. The App is now expected to release in upcoming days within 2 weeks.

Whether the app will be able to replace ZOOM and it's counterparts will depend on the improvement it undergoes before the next rollout. Stay Tuned for further updates about the app.