Meta Platforms is getting surrounded with unwanted challenges one after another. A new report claims that a hacker hacked WhatsApp and stole personal data from around 500 million users. To make the situation even more worrisome for the WhatsApp management team the hacker has allegedly put the data up for sale on the internet.

The leaked data, which includes data from Indian users as well, is being sold very cheaply. The US dataset with millions of users is available for $7,000, while the UK one costs $2,500.

The person who put up the data for sale claims that there are 32 million records of users from the US within the set. It also has numbers of millions of users from Egypt, Italy, France, the UK, Russia, and India.

According to the report, the US dataset is available for $7,000, while the UK one will cost $2,500. Cybernews’ report said that when they contacted the seller, he shared 1,097 UK-based numbers as proof. The publication investigated the numbers and confirmed that they were all from WhatsApp accounts.

This is not the first instance that a Meta-owned platform has been hit by a data breach. Last year, the personal data of over 500 million Facebook users, including 6 million records from India, was allegedly leaked. The leaked data then included phone numbers and other details.

The parent company Meta has gone into damage control mode and is yet to pass any official statement on the incident. It is believed that WhatsApp data containing around 500 million users was obtained via web scraping and harvesting. In this way, hackers make use of an automated tool that collects data from a particular service. This is a violation of WhatsApp’s terms.

In 2019, data from 419 million Facebook and 49 million Instagram users were exposed. In the same year, it faced another breach leaving the data of 267 million users exposed. The leaked data, which includes data from Indian users as well, is being sold very cheaply. The US dataset with millions of users is available for $7,000, while the UK one. 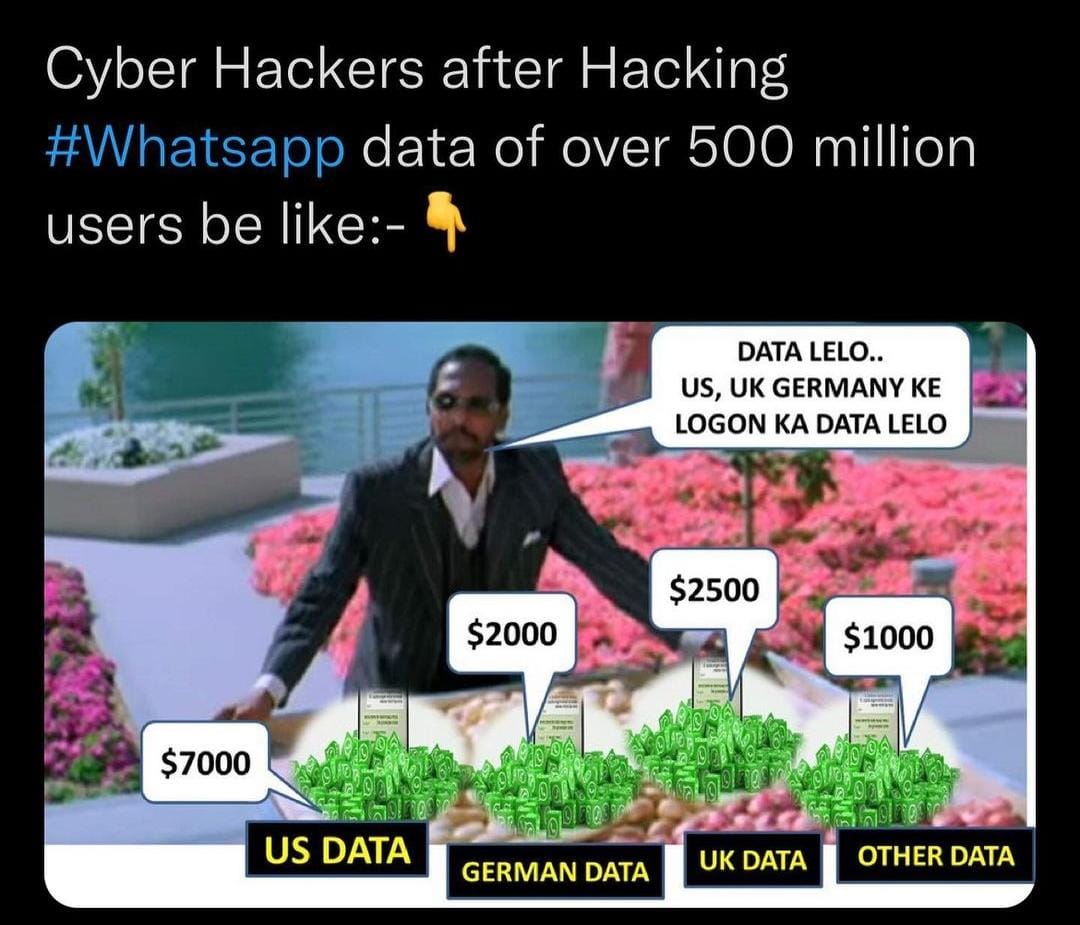 This is not the first time when hackers or cybercriminals aimed at WhatsApp. Hackers have been trying to make use of any possible loophole in WhatsApp for some time. In 2017, a major bug was identified in WhatsApp which allowed hackers to take control of a user’s account. WhatsApp identity theft and hackers using WhatsApp to spy on users were other concerning incidents that left hundreds of millions of WhatsApp users stunned in the past.

“The claim written on Cybernews is based on unsubstantiated screenshots. There is no evidence of a ‘data leak’ from WhatsApp,” the WhatsApp spokesperson said. He also clarified that the purported list of phone numbers, which is up for sale, is just a random dump of phone numbers, and not the personal information of WhatsApp users.