Fuchsia has appeared on the Bluetooth SIG website in the past as well. Its Bluetooth software stack, which is codenamed “Sapphire,” received approval in August last year. Today’s entry even includes a reference to that earlier listing (via). Originally, this device ran what is called the Google Cast platform – the same operating system found in Chromecasts, though modified to be more visual.

The Nest Hub, that has appeared on the listing, is most likely a modified version that Google must have provided to the developers. The search engine giant has reportedly been testing the software on multiple devices. It includes Google Pixel book, Nest Hub, and Nest Hub Max. Well, one of them has now appeared on the regulatory body.

We always come back around to this question, and I think it’s important to ask – what exactly does this mean for you? Well, at this time, it means absolutely nothing. I know that’s anti-climactic, but it’s true. 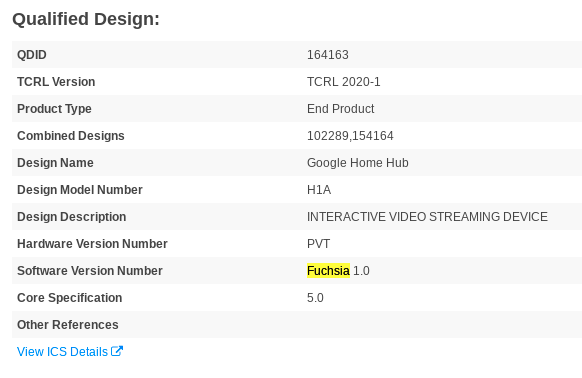 The software is claimed to be a potential replacement for Android by the tech community. Well, the operating system has now been making rounds on the internet once again. This time we’re looking at Google Nest Hub powered by Fuchsia OS. Google Nest Hub. The retail units have security measures disabling the use of unsigned software. For you to try out the new software, Google would have to put an official build.

I’m a bit of a dreamer, so I would like to believe that it means our adventure into the future is about to begin. In fact, today’s listing of the Nest Hub running Fuchsia includes a reference to that earlier Sapphire listing. Instead, it could be more likely for Google to do a limited run of the Nest Hub hardware specially modified for developers to both tryout Fuchsia OS and test their apps on real devices.