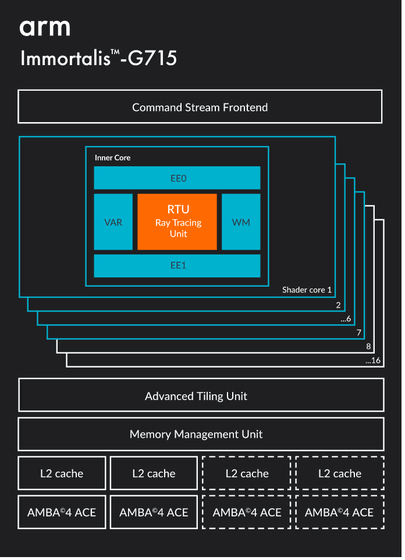 Ray tracing is highly sought tech for the recent generations of desktop GPUs and consoles and it even made its way on mobile. ARM is getting in on the action with a new GPU line, Immortalis. The company's new Immortalis GPU features improvements such as variable-rate shading, efficiency gains, and ray-tracing.

Arm announced a new generation of Armv9 CPUs, namely the Cortex-X3 and the Cortex-A715. The company also announced a “refreshed” Cortex-A510, but more on that in a bit. In addition to this ARM also made some GPU-related announcements, starting with a new flagship GPU dubbed the Immortalis-G715.

According to Paul Williamson, the general manager of Arm’s client business, the new Immortalis GPU lineup will “supercharge the Android gaming ecosystem with unrivaled performance,” built on the “heritage” of its Mali GPU lineup. The new Immortalis lineup includes both the Immortalis-G715 as well as the legacy Mali-G715 and Mali-G615. The Immortalis lineup will offer hardware ray tracing. The Mali-G715, designed for mid-range smartphones, will include variable-rate shading, Williamson said, while the -G615 will be offered for more mainstream devices.

Arm is promising that its new GPUs will offer a 15 percent performance improvement over its previous generation.

What actually is Ray-Tracing?

Ray tracing is a graphics rendering technique used to better simulate the way light illuminates a scene. The PS5 and Xbox Series consoles as well as gaming PCs use hardware-enabled ray tracing to deliver better-looking shadows, reflections, and lighting in video games.

Immortalis-G715 will use approximately 4% of power per the shader core area while delivering more than 300% performance improvement. The trade-off here is that the Immortalis can and will use significant power, energy, and area within the SoC it is attached to.