Android 12 has only recently been released on a tiny number of the world's greatest smartphones, but we're already looking forward to Android 13. The next major version of Google's mobile operating system has already received two developer previews and is already in beta testing. Furthermore, it appears that we will witness a stable launch considerably earlier this year than last. 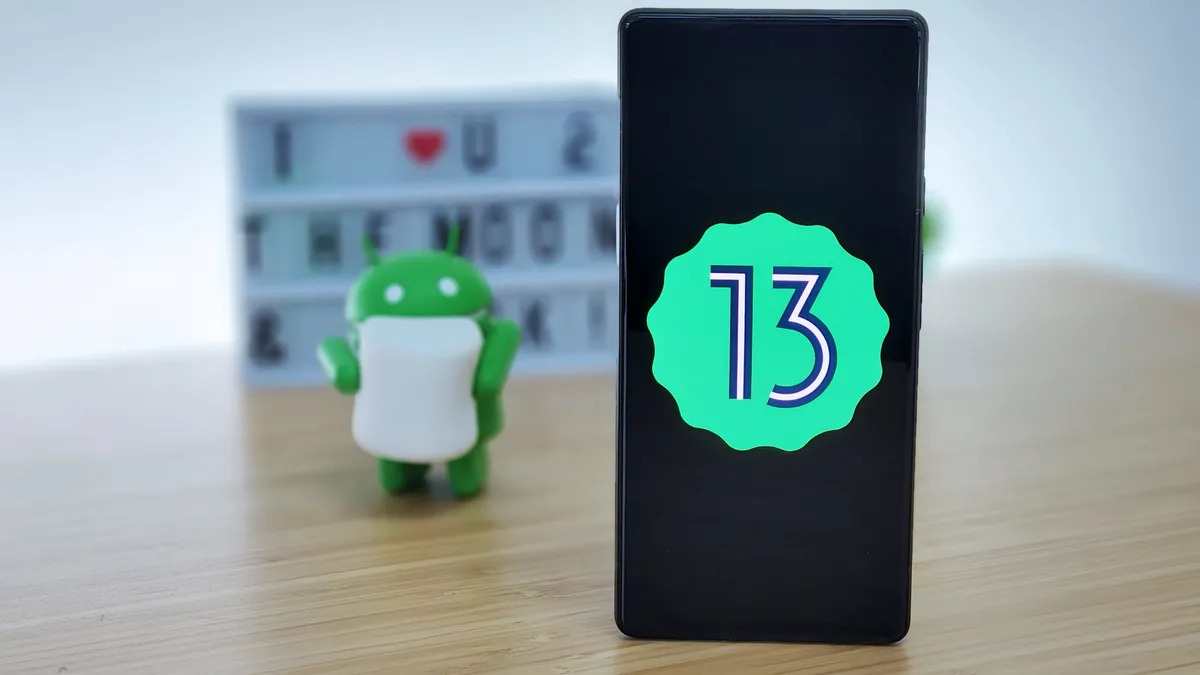 We'll look at what to expect from the upcoming major Android version update in the sections below.

Prior to Android 10, Google named its operating systems after sweet sweets. Although it has transitioned to a number in public, versions are still frequently referred to as confectionery internally. We know the codename for Android 13 is "Tiramisu" thanks to the first developer peek. This is the first time in a long time that Google has been so forthright about the codename.

Google has provided a release timeline for Android 13. According to that timeline, we should expect at least two developer previews, four betas, and a stable launch in August 2022. However, things could change dramatically between now and then, so don't jump to conclusions just yet.

With Material You, Android 12 introduced one of the most important UI updates to the operating system in years. The redesigned interface allows for more personalization options, such as wallpaper-based colour palette controls and more intuitive animations. Android 13 does not look to change things dramatically, but Google will nonetheless include new functionality and design improvements. 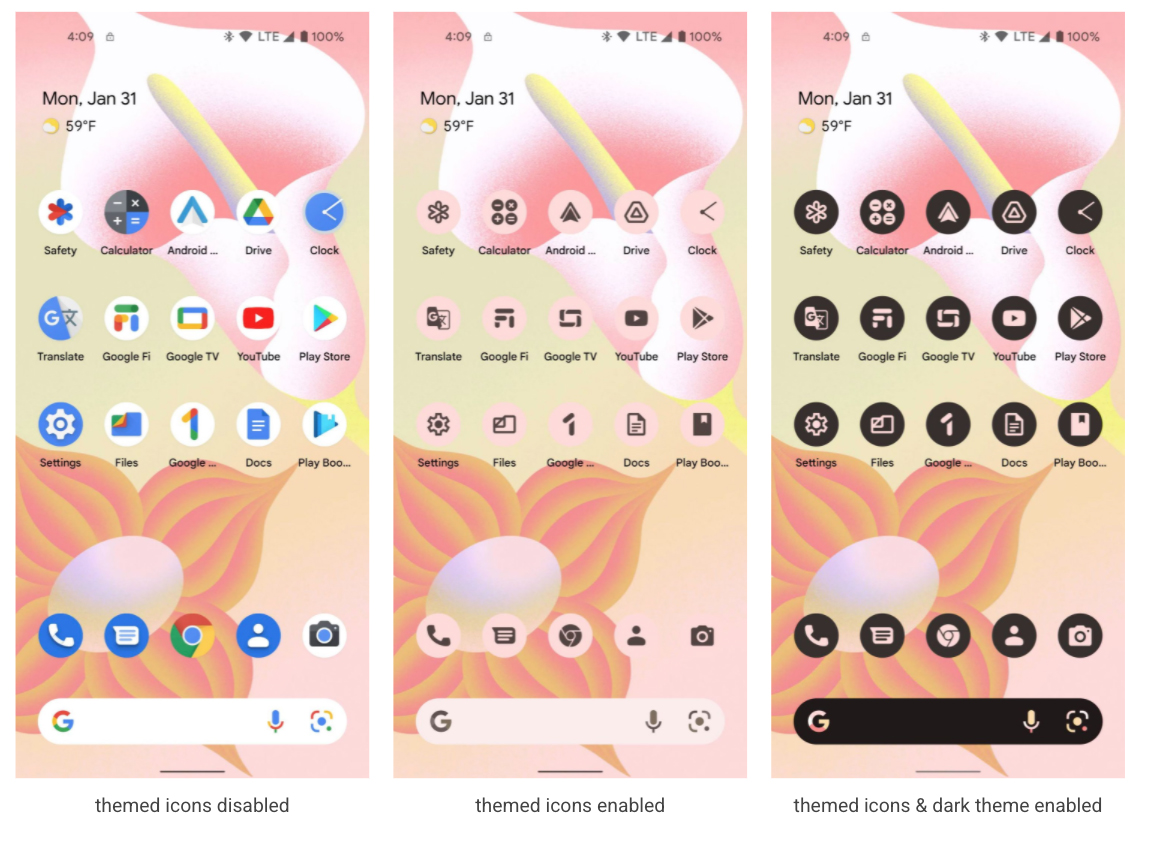 When Google released the initial developer peek, it revealed the screenshots shown above. It looks like the 2022 version of Android will allow you to customise your icons in the same way that Android 12 allows you to theme the rest of the operating system.

Regrettably, there are two caveats here. The first is that, at least initially, this will only be available on Pixel devices. The second limitation is that this will only function with apps that include a monochromatic icon for Material You to utilise.
In other words, don't anticipate a fully functional and comprehensive theming experience when Android 13 initially becomes available. It may take some time before this becomes as automatic as Google hopes. 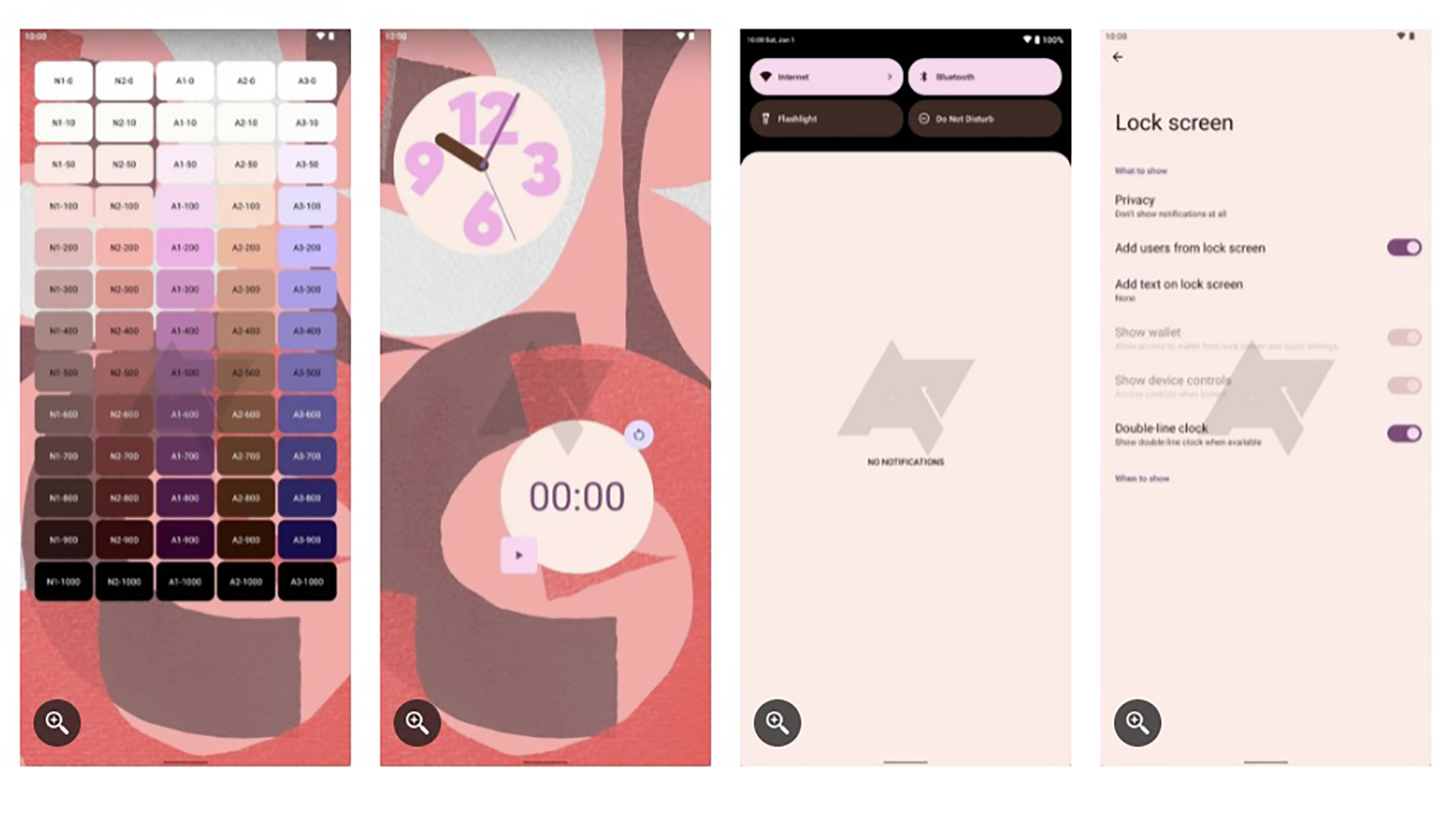 Android 13 could expand the existing color-theming possibilities by introducing four new palettes pertaining to certain shades or complementary hues, according to a claim based on leaked code. This was eventually confirmed in Android 13 DP2, albeit the feature is still disabled.
TONAL SPOT, VIBRANT, EXPRESSIVE, and SPRITZ are some of these experiences. While the first two alternatives are startlingly similar, the latter two possibilities represent a significant change from Android 12's current theming system. 'Expressive' appears to use colours that aren't directly drawn from the wallpaper, whilst 'Spritz' uses a grayscale, neutral palette.

This may not be the level of granularity that many people desire, but it's a start.

The media player in your notification area will change appearance. The controls have been rearranged and the album art now takes up the entire background of the widget. We also noticed in the initial beta that while your song plays, the progress metre forms a shaky line. However, it's unclear whether these adjustments will be limited to Pixels.

Android 12 brought a number of new features, including one-handed mode and built-in scrolling screenshot support, as well as improved auto-rotate settings and an AppSearch tool. What, on the other hand, may Android 13 bring?

On Android, QR code scanning is inexcusably cumbersome, but that may soon be a thing of the past. In the first developer preview, there was a quick toggle button, but it didn't work. In the second developer preview, it started working. The feature is basic, yet it eliminates the need for a separate programme!

In the future version of Android, wireless audio will be improved. It will come with Bluetooth LE Audio and the Low Complexity Communications Codec pre-installed (LC3). The codec is a major deal, with decreased power consumption and better audio quality across all supported devices. 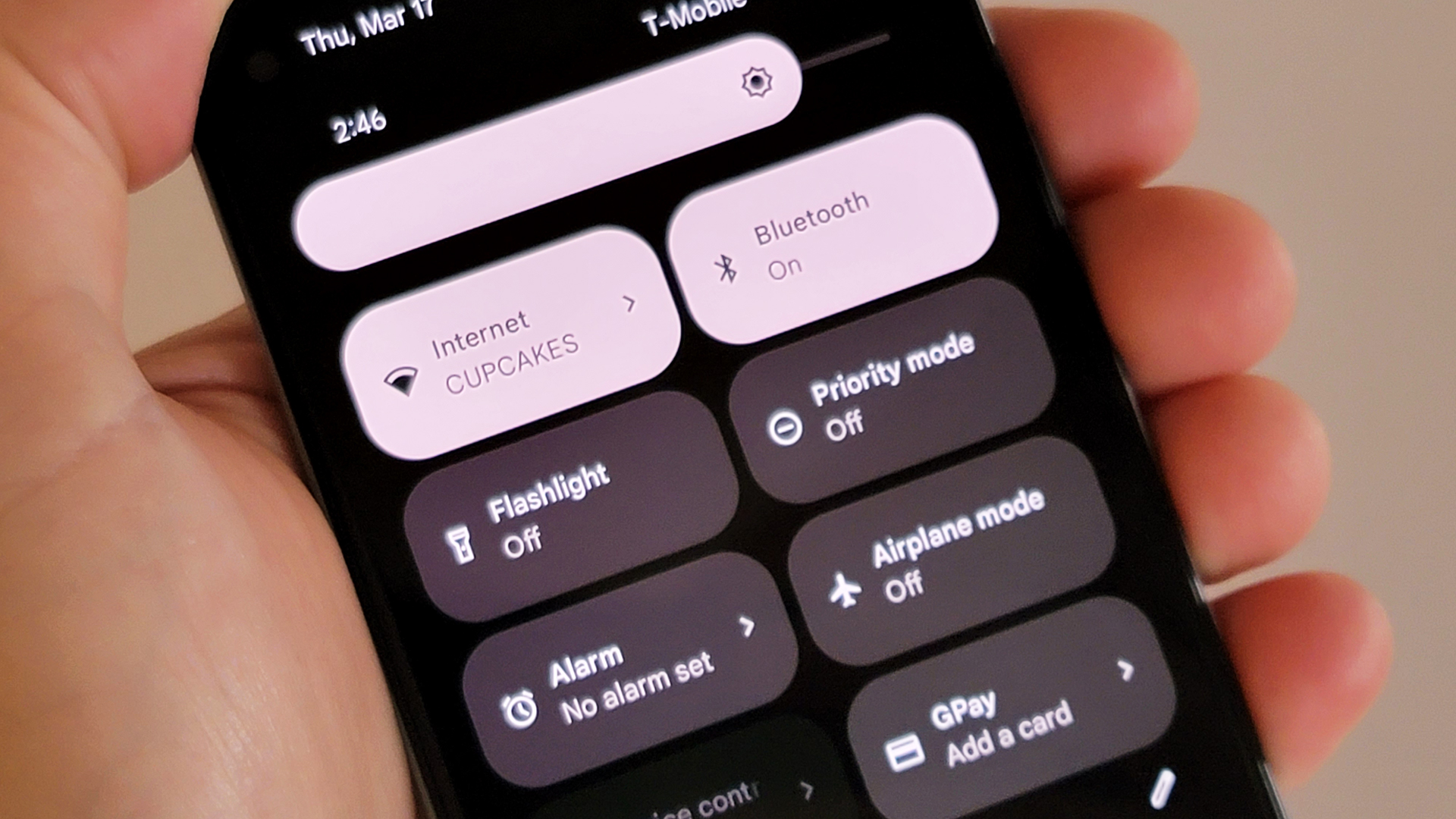 Google renamed Do Not Disturb as Priority Mode in the second development preview (see the photo above). However, Google restored this to Do Not Disturb in the initial beta. We'll have to wait and see whether it reconsiders its position on this.

When you put your phone on quiet, you want it to be completely silent. Vibrations and haptics, however, continue to occur in this mode. Silent mode, on the other hand, in Android 13 disables everything, allowing you to use your phone in complete silence.

A pleasant surprise could result in more intelligent media sharing across various devices. Android Police discovered a tap-to-transfer (TTT) system that will allow users to move media controls to other devices, according to leaked details from "an unknown and credible source."

The audio output selection has been reworked in Android 13. It's largely an aesthetic update to better complement the Material You scheme, but it'll make moving to a new output system a lot easier.

This might be the best improvement to Android 13 if you're multilingual. Per-app language toggles are part of the first developer preview. Users will be able to specify different languages for different apps, independent of the system configuration.

Android 13 may let several users on a smartphone to set up their own NFC payment service on their separate profiles, according to commits made in July 2021 (h/t XDA).

In Android 13, you'll notice a new alert box in the lower-left corner when you cut or copy text (see above photo). Not only will you be able to see what's on your clipboard, but you'll also be able to edit it fast by tapping the pencil icon. The most recent version will appear when you choose to paste the content. This is a minor tweak that could have significant implications for Android text usability.

Even if you have a toggle right on the lock screen, you must unlock your phone to manage an aspect of your smart home. However, within Android 13, you will be able to overcome this restriction if you so desire. Simply go to Android Settings > Lock Screen and toggle the appropriate setting. To protect user privacy and security, this will be turned off by default.

For Google, privacy and security are paramount. With each new Android release, Google improves the operating system's security and privacy, giving users more control over the things that matter most to them. Android 13 is no different.

The document picker that appears when you share a document with an Android app is fairly safe. It doesn't give the app access to all of your documents; only the ones you choose are accessible. The photo picker, on the other hand, hasn't proven as safe. That, however, is changing in the upcoming Android version. Take a look at it in action below.

The Android 13 photo picker will be built into the operating system itself, making it possible to select photos from both local and online storage across all apps. Even better, this functionality will be pushed to all Android 11 and Android 12 phones via the Google Play Store, so you won't need Android 13 to use it (with the exception of Android Go-based phones).

If an app in Android 12 wants to locate nearby Wi-Fi devices, it will almost certainly require location permission. This is unnecessarily risky. Google is adding the new NEARBY WIFI DEVICES runtime permission in Android 13, which gives developers a new alternative that doesn't require unnecessary location access.

You must grant apps permission to access some capabilities, such as your location, camera, and microphone, with the most recent stable versions of Android. You'll have to do the same thing with notifications when Android 13 arrives.

This would finally put an end to the problem of a newly downloaded software bombarding you with warnings, forcing you to go through system settings to turn them off. Instead, you may simply refuse to allow an app to give you notifications when you first install it.

This is identical to the notifications permission mentioned a few lines before. When an app wants to access media files saved to a device's local storage in Android 12 and older, it must first ask permission. That permission, READ EXTERNAL STORAGE, allows the programme to access all types of media, not just the ones it needs. Android 13, on the other hand, will not work in this manner. For each sort of saved media, you'll need to provide permission:

The three permissions are:

Now you're probably thinking about how inconvenient it will be to give an app three distinct permissions. This has been anticipated by Google. When an app asks for both READ MEDIA IMAGE and READ MEDIA VIDEO permissions at the same time, you'll receive a single dialogue box for both.

Users won't have to worry about an app having too much access to their media as a result of this. It's yet another step in the right path for Android's privacy and security.

The ability to quickly pair is a fantastic feature. It enables you to rapidly pair your phone with Bluetooth devices such as headphones. Rather of having to add things manually, your phone will just notify you that anything is nearby and ask if you want to couple with it.

Fast Pair is now incorporated right into Android 13, making it much easier to utilise.

Android 13: Under the hood upgrades

According to current information, Google will make a few changes to Android 13's skin. The way permissions are handled and how much battery is used may be tweaked once more.

According to one report, TARE, or The Android Resource Economy, could lead to greater battery optimization.

The feature, according to XDA, is a more intricate credit-based power management system that enables or disallows actions requested by apps based on how low a device's battery is. It seems complicated, and there isn't enough information to fully explain it, but it could be a feature to keep an eye on in the coming weeks.