These freeze-dried components are surrounded by silicone elastomer, the researchers said. The sensors are placed on the inside of the mask, so they can detect viral particles in the breath of the person wearing the mask. Engineers at MIT and Harvard University have designed a novel face mask that can diagnose the wearer with Covid-19 within about 90 minutes. The masks are embedded with tiny, disposable sensors that can be fitted into other face masks and could also be adapted to detect other viruses. 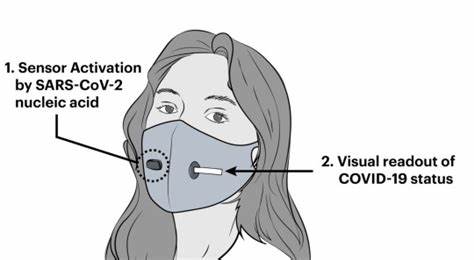 The mask is made such that the wearer is able to activate the sensor whenever he wishes to take the test. Once activated, breathing into the mask normally will give results. The prototypes developed in this study have sensors on the inside of the mask to detect a user's status, as well as sensors placed on the outside of garments, to detect exposure from the environment. The sensors are placed inside the mask, so as to detect the viral pathogens in the breath of the wearer.

It includes a small amount of water that is released once the wearer activates it. This hydrates the freeze-dried components and activates them, which analyzes the accumulated breath droplets on the inside of the mask. After a wait of around 90 minutes, the results are displayed. This test is as sensitive as the gold standard, highly sensitive PCR tests, but it’s as fast as the antigen tests that are used for quick analysis of Covid-19.

This compartmentalization prevents the sample from evaporating or diffusing away from the sensor. To demonstrate the technology, the researchers created a jacket embedded with about 30 of these sensors. In the research paper published recently in Nature Biotechnology, these sensors could even be used in clothing such as lab coats to monitor health workers' potential exposure to different pathogens.