Google Hangouts to be Replaced by Google Chat 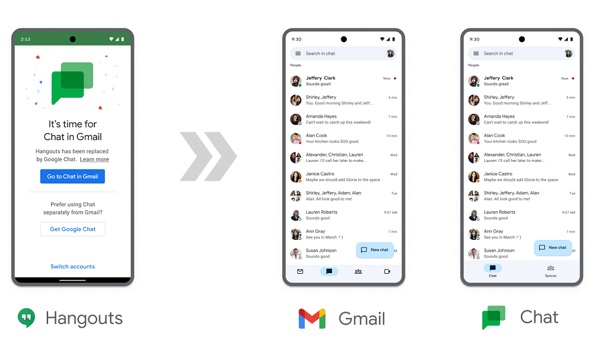 Google is shutting down its cross-platform instant messaging service Hangouts after 9 years. Google has started sending in-app alerts to Hangouts mobile users asking them to switch to Chat in Gmail or the Chat app.

Google Hangouts is going to shut down in November. Its successor is Google Chat, which is not the same as GChat, which was also known as Google Talk, which Google discontinued earlier this month. None of those are the same as Spaces, which is the new name for Rooms.

Google maintains that Chat will offer users a more comprehensive and interactive experience than the Hangouts interface was able to provide, such as text editing options, @ mentions to tag other users, and even the use of extensive emojis and GIFs.Chats is also better overall integrated into Google’s ecosystem as it offers the ability to collaborate on docs, sheets, etc via Spaces, side-by-side editing and more.

Hangouts data will be available to Google Account holders starting in October via Google Takeout. Google Chat is available via both the web and as a dedicated client on Windows, macOS, and Linux. From this initial information, it seems it’s a part of Google’s strategy to mold Gmail into something resembling Slack, one of its biggest competitor.