Doctor Web’s malware analysts actually found 10 of these trojan apps, and out of these nine were available on the Google Play Store. These Android apps are stealer trojans and were spread as harmless software. Google Play Store yet again became a haven for malicious apps. A set of new Android apps have been recently found that were stealing people’s Facebook usernames and passwords.

To get access to all of the apps’ functions, and also to disable in-app ads, users were asked to log onto their Facebook accounts. Google has deleted these apps from the Play Store. In case you have any of them on your smartphone, it’s time for you to delete them too. Here’s all you need to know.

The apps lured people into signing into their Facebook accounts to get rid of in-app ads and get access to more app features. This is a stage wherein people would easily enter their details when a Facebook login page was prompted.

As found by researchers at Doctor Web, the Android apps had a mix of five malware types and used the same JavaScript codes and file formats to steal people’s Facebook credentials. Following this, the stolen data was transferred to the trojan apps and then to the hackers’ C&C servers. 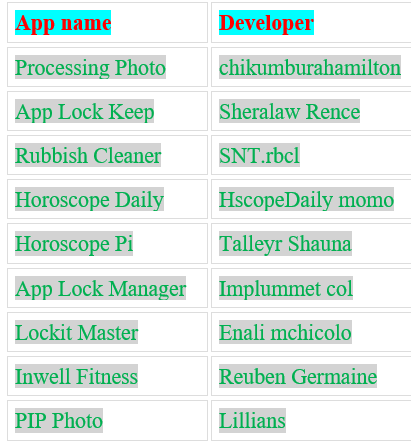 In addition to this, the malicious apps stole cookies from the current authorization session. Here are the apps that were responsible for the bad deed:

How to make your Laptops & PCs faster: Best Tips You Must Try