Nvidia today announced its next-generation RTX 30 series of graphics cards. Based on the new Ampere architecture, the three new cards being announced today — the RTX 3090, RTX 3080, and the RTX 3070 — claim big improvements in rasterized and ray-traced 3D rendering. “ NVIDIA RTX fuses programmable shading, ray tracing, and AI for developers to create entirely new worlds. Twenty years from now, we’ll look back and realize that the future of gaming started here.”

The company has added three new ray-tracing enabled cards under the line-up. The new cards bring significant performance gains over the last years of graphics cards. The RTX 3090 is the new flagship graphics card in this lineup, which will be taking over the mantle from the Titan RTX. The RTX 3090 boasts 50% improved performance over the Titan RTX and even claims to do 8K at 60fps "across many top games". Samsung's 8nm process that has been designed specifically for Nvidia's RTX 30 series cards.

NVIDIA claims that the RTX 30 series provide 2x the performance in ray-traced video games and when compute-intensive tasks such as ray-tracing and DLSS are turned off, the RTX 30 cards supposedly provide pascal-like performance increments. For a better perspective, NVIDIA did release a graph showing relative performance.

With the RTX 3070, games such as Borderlands 3, Doom Eternal, Red Dead Redemption 2, Control, Minecraft RTX, Wolfenstein Youngblood were shown to have about 1.3-1.4x performance over the RTX 2070 Super and the RTX 3080 provides nearly 1.9x performance over the RTX 2070 Super. When compared with the RTX 2080 Super, the RTX 3080 provides about 50-60% more performance. These are all approximations based on the graph released, we’ll get a better idea when the cards are benchmarked.

The specifications for the three RTX 30 cards when compared to their RTX 20 counterparts let you know exactly how they are positioned. With 24 GB of memory, the RTX 3090 is akin to the RTX TITAN and would be targeted at workstations and multitasking machines which require a lot of CUDA cores. Whereas, the RTX 3080 and RTX 3070 are very much similar to the RTX 2080 and RTX 2070 in terms of positioning. Which bears the question, what's the equivalent for the RTX 2080 Ti? It would appear that NVIDIA is holding back till AMD's RDNA2 "Big Navi" cards are released in November 2020. We should hopefully see RTX 3080 Ti or Super cards that equal or beat the RDNA cards as a reaction to AMD's cards.

What super are improvements are there? 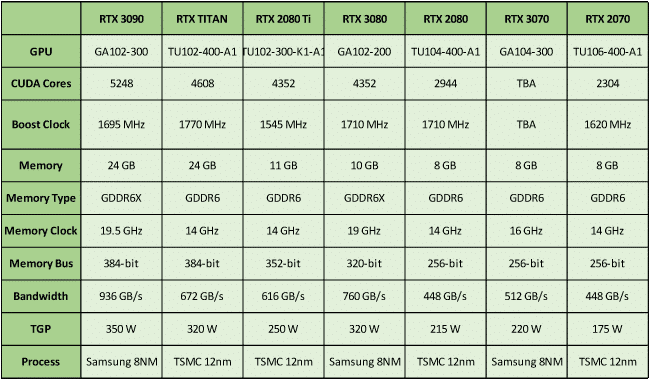 With the launch of our GeForce RTX 30 Series GPUs, we’re introducing NVIDIA Reflex, a revolutionary suite of GPU, G-SYNC display, and software technologies that allow gamers to measure and optimize system latency. Lower latency makes your PC more responsive to mouse input, which can make all the difference between winning and losing in fast-paced games where milliseconds matter.

Memory manufacturer Micron is debuting its new GDDR6X memory on the GeForce RTX 3090 and GeForce RTX 3080. GDDR6X uses innovative PAM4 signal transmission technology to once again double the data rate per clock, delivering unprecedented graphics memory performance to feed the most data-hungry workloads, such as gaming, professional visualization, and AI inference. These enhancements ensure the GPU’s compute cores and other components receive a constant stream of data, rather than stalling while they wait, maximizing efficiency and performance.

4. AI-Powered Voice and Video With the NVIDIA Broadcast App

The new NVIDIA Broadcast app turns your room into a home broadcast studio. It uses the power of AI and Tensor Cores on NVIDIA RTX GPUs to enhance voice and video communication with features like noise removal, virtual background, and auto frame.

PC storage solutions are entering a new era with the launch of blazing-fast Gen4 PCIE NVMe SSDs, capable of reading speeds up to 20x faster than drives released just a few years ago. To make full use of these speeds, developers and game engines are working on advanced streaming and loading solutions that will allow the creation of larger worlds with less loading, less pop-in, and more detail. Just as we did with RTX and DirectX Raytracing, we are partnering closely with Microsoft to make sure RTX IO works great with their DirectStorage on Windows API.

In ray-traced games, performance is up to 2X faster compared to our previous-generation graphics cards. And in rasterized games without ray tracing and DLSS, GeForce RTX 30 Series graphics cards deliver the performance necessary for max setting, high resolution, high framerate gameplay, giving you the definitive experience.

The elephant in Big House for Gaming

More importantly, all of them improve significantly on last year's Nvidia GPUs in their own particular segments. Talking about the GPUs, the RTX 3070 is the entry-level RTX card for this year, and the company claims it faster than last year's powerful graphics card, the RTX 2080 Ti, at less than half the price. Interestingly, it also claimed to be 60% faster than the original RTX 2070. The new GPU comes equipped with 8GB of GDDR6 memory, which Nvidia claims makes it ideal for games running at 4K and 1440p resolutions.

The RTX 3080 is pegged as a 4K gaming solution that can hit "60 frames per second for 4K resolution gaming."

These changes, among others, gave us the space to chop a large fan-sized chunk from the PCB, giving our dual axial flow through cooling solution plenty of space to breathe. These card-wide cooling innovations allow us to give you more performance, without a corresponding increase in temperature or noise over prior-generation graphics cards. As heat is drawn away from components into the hybrid vapor chamber, it is efficiently distributed across the length of the card and throughout the massive aluminum fin stack. The left fan pushes air heated by the fin stack out through extra-large GPU bracket vents, while the right fan draws the air towards the top chassis exhaust. To that end, our engineers designed a much smaller PCB, shrank the NVLink and power connectors, and still managed to pack in 18-phases for improved power delivery.