Mediatek has really reshaped competition in the Android chip market with their recent releases. Their most recent flagship, the Dimensity 9000 was critically acclaimed on release, and even managed to trade blows with the Snapdragon 8 Gen 1. Just now, well known Weibo tipster, DCS, even shared Antutu scores of the upcoming Dimensity 9200.

If you look at the broken down scores, the CPU only registers a marginal improvement over the previously released Dimensity 9000+. The big jump in overall scores comes from the significantly improved GPU, powered by the new Arm Immortalis-G715.

With these scores, the Dimensity 9200 will likely be the most powerful Android chip when it releases next month. That is until the Qualcomm Snapdragon 8 Gen 2 officially releases. Its not clear yet, which will be the first phone to sport the upcoming Mediatek 9200, but recent rumors suggest Vivo could take the lead with the Vivo X90. Should We Trust Benchmarks?

Benchmarks are the easiest way to measure and understand the performance of a processor. However, over the last few years, we have seen brands whitelisting certain benchmark apps to run at higher clock speeds while ignoring temperature limits. In fact, big brands like Samsung and OnePlus are known to rig benchmarks. 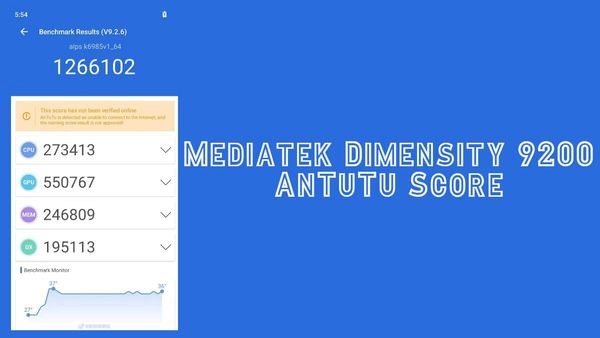 The most recent Dimensity chips were also very efficient, and that seems to carry over to the upcoming Dimensity 9200. As the screenshot shows, the CPU temps rises from 27°C (room temperature) to a very comfortable 36-37°C, and also stays within those ranges during the strenuous test.

This helps brands claim the top spot in the best-performing phone chart. However, when it comes to real-world performance, the performance might not be as good as the benchmark's claim. Hence, these scores should be taken with a pinch of salt.