According to a benchmark leak, Google’s first foldable Pixel will feature the Tensor G2, the same chipset powering the Pixel 7 and Pixel 7 Pro. The Geekbench listing shows that the Google 'Felix' smartphone scored 1047 points on the single-core test and 3257 points on the multi-core test. The phone has 12GB RAM.

The scores are similar to what Google Pixel 7 Pro with 12GB RAM scored - 1048 and 3139 points on Geekbench's single and multi-core tests, respectively.

Google is yet to confirm the development of the smartphone, though its high-res renders surfaced online last month. The renders were based on an alleged prototype, and there could be minor changes in the final versions.

What is Geekbench and how much did the smartphone score?

The codename ‘Felix’ is often associated with Google’s foldable Pixel, and according to Geekbench 5, the single-core and multi-core results have shown up. In terms of performance, the Tensor G2 does not fare better than the SoC running in the Pixel 7 and Pixel 7 Pro, obtaining a score of 1047 and 3257. Though this makes the chipset significantly slower than the competition, we will see what optimizations Google makes to ensure the Pixel Fold is responsive in real-world tasks.

The CPU configuration of the Tensor G2 running in the ‘Felix’ remains the same. You get two high-performance Cortex-X2 cores running at 2.85GHz, two mid-range Cortex-A78 cores operating at 2.35GHz, and four Cortex-A55 cores with a frequency of 1.80GHz. Aside from that, the alleged smartphone is running Android 13 right off the bat and features 12GB RAM.

Google Pixel Fold: What are the expected specifications 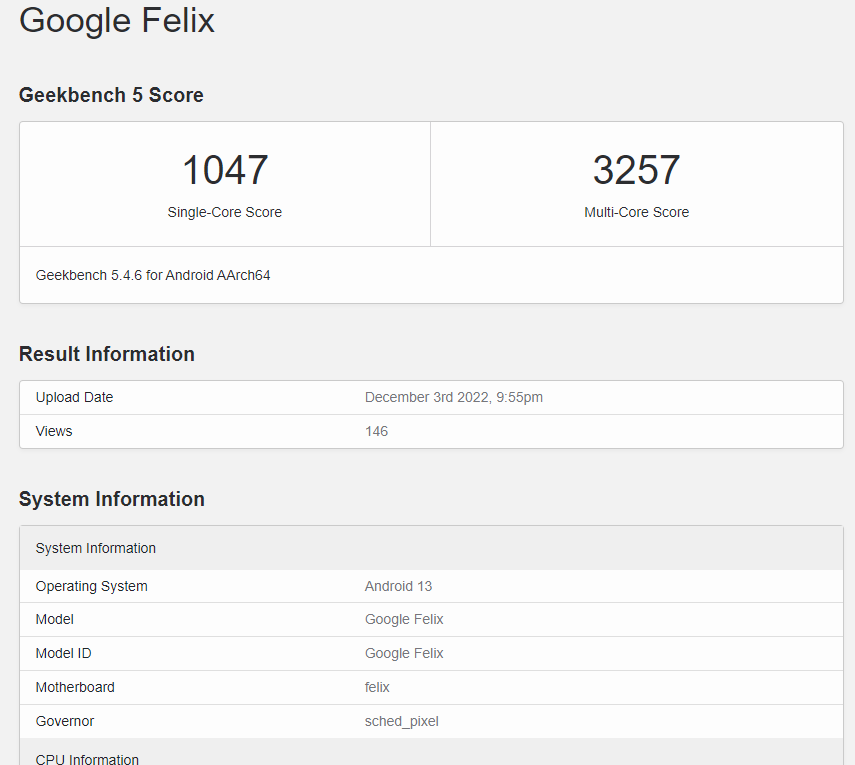 The Pixel Fold will flaunt an inward-folding book-like design, a glass body, a polished metal frame, and a side-mounted fingerprint sensor. The rear camera module will jut out, and not join the metal frame as seen on the Pixel 7 series phones. The cover screen will have a punch-hole cut-out, while the main display will have a thick top bezel housing a selfie camera.

It may feature a 64MP main camera

The Pixel Fold is tipped to feature a 64MP Sony IMX787 primary sensor, a 12MP IMX386 ultra-wide camera, and a 10.8MP S5K3J1 telephoto snapper. There will be a 9.5MP selfie camera on the outer screen.

Felix will be powered by a Tensor G2 chip

Google's Pixel Fold, said to be codenamed Felix, will be powered by the Tensor G2 chipset. It will come paired with 12GB of RAM.According to the Geekbench listing, the device will boot the Android 13 operating system.The previously revealed renders have confirmed top and bottom-mounted speakers on the device, along with a mmWave 5G antenna on the top.

The alleged renders highlight a pill-shaped cutout on the prominent rear module for the triple camera sensors. It is also reported that Google's folding smartphone will be much heavier than Samsung Galaxy Z Fold 4.