When you want to get a true sense of how fast a phone will work, use these rankings with a pinch of salt. Performance is not just hardware, it also matters how optimized the software is.

A12 Bionic, also known as Apple H11P (engineering name) is a 64-bit hexa-core ARM performance mobile SoC introduced by Apple in late 2018 as a successor to the A11. It is codenamed Cyprus. Fabricated on TSMC 7 nm process and integrating 6.9 billion transistors, the A12 features two big Vortex cores operating at up to 2.4 GHz along with four little Tempest high-efficiency cores. Apple claims the big cores are up to 15% faster than the one in the A11 while being up to 40% more efficient. For the four high-efficiency cores, Apple claims up to 50% higher efficiency. Note that all six cores can operate concurrently. It first appeared in the iPhone XS, XS Max, XR, and 2019 versions of the iPad Air and iPad Mini. Apple states that the two high-performance cores are 15% faster and 50% more energy-efficient than the Apple A11's, and the four high-efficiency cores use 50% less power than the A11's. It is the first mass-market system on a chip to be built on the 7nm node. 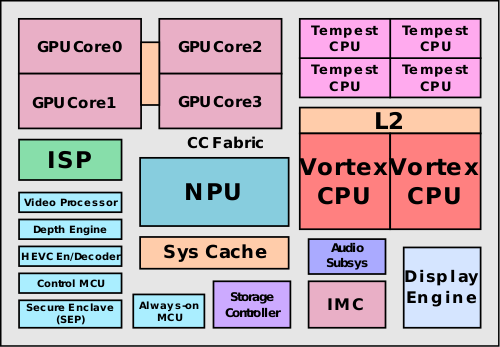 Snapdragon 855 is a high-performance 64-bit ARM LTE system on a chip designed by Qualcomm and introduced in late 2018. Fabricated on TSMC 7nm process, the 855 features four Kryo 485 Silver high-efficiency cores operating at 1.8 GHz along with three high-performance Kryo 485 Gold operating at 2.42 GHz and another higher-performance Kryo 485 Gold core operating at 2.84 GHz. The Snapdragon 855 integrates the Adreno 640 GPU operation at 600 MHz and features an X24 LTE modem supporting Cat 20 uplink and Cat 20 downlink. This chip supports up to 16 GiB of quad-channel LPDDR4X-4266 memory. The Snapdragon 855 can be paired with Qualcomm's X50 5G modem (an external chip) and an RF front-end interface chip (RFFE) to bring 5G NR, sub-6 GHz, and mmWave, support.

Exynos 9820 is a 64-bit octa-core ARM high-performance mobile system on a chip designed by Samsung and introduced in early 2019. The processor is fabricated on Samsung's 8nm LPP (Low Power Plus) FinFET process and features 8 cores in a tri-cluster configuration consisting of 2 Mongoose 4 big cores and 2 Cortex-A75 middle cores and 4 Cortex-A55 little cores. This chip supports up to 12 GiB of quad-channel 16-bit LPDDR4X-3600 memory and incorporates a Mali-G76 MP12 GPU. The 9820 incorporates an LTE modem supporting cat 20 download and upload.

Supported Galaxy Devices to Get ONE UI 4.0 Update

What is Cryptocurrency? Is it secure?