Krafton is shifting its services to bring back the game to the users in the country. It remains to be seen whether this game will make a comeback to India and how long it might take.

After the ban on several Chinese apps, including TikTok, PUBG Mobile, and many others, the Indian government removed Battlegrounds Mobile India popularly known as BGMI. The app was banned by the Ministry of Electronics and Information Technology (MeitY) under section 69A of the IT Act 2000, similar to the Free Fire and PUBG Mobile ban in the country.

The battle royale title had completed its first anniversary a few days back, with its parent game, PUBG Mobile, being banned alongside over 100 plus Chinese applications in 2020. Krafton then released this specially-designed game, Battlegrounds Mobile India, and assured players that the new version complies with all government laws and regulations.

The Twitter user filed an RTI earlier this month. He also asked if Krafton attended any meetings with the government regarding the removal of the game. He further requested the meeting's final outcome and the discussion of the meeting.

Many gamers could not grasp that the gaming title has once again been banned in the country. They were eagerly waiting for the authorities and other platforms to give them the required details on the reason for the ban. The initial statement came from Google, mentioning the game had been removed on the orders of the Government of India.

A statement by the tech giant's spokesperson to a source read the following:

Google statement: "On receipt of the order, following established process, we have notified the affected developer and have blocked access to the app that remained available on the Play Store in India.”

Other personalities also shared possible reasons for the suspension:

After Official statements from Krafton, it’s now clear that BGMI banned in India due to the security and privacy concerns of user data. 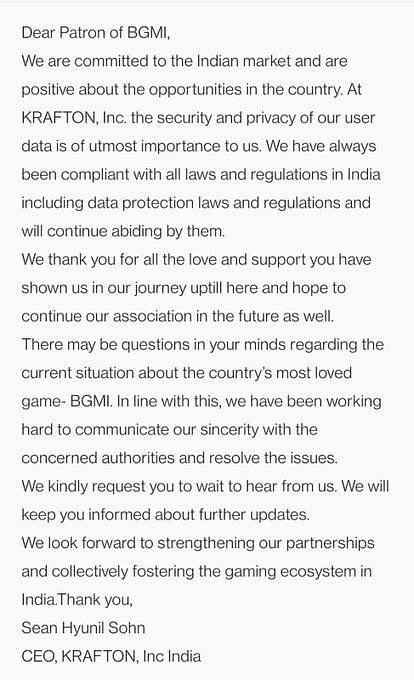 On @Reuters - a source says BGMI game of Krafton banned under section 69A of IT law, often used to ban Chinese apps due to national security concerns. Krafton shares fell 9 pct in morning trade in South Korea. They can also try other battle royale games like Free Fire MAX, which offers excellent compatibility with a wide range of devices.

Really comes as a shocker because the Growth of Esports in India has been tremendous. All will come down to a stop if something happens to BGMI(Top esports game in India). Many YouTubers have come forward and shared their concerns over the growth BGMI was offering to the Indian esports scene and the effects the ban will have on the community.

However, Krafton officially released a note on why the game received a ban from the concerned authorities. The reason mentions that the ban is related to user security concerns. After Official statements from Krafton, it’s now clear that BGMI banned in India due to the security and privacy concerns of user data.

Fans are advised to be patient as officials urge players to wait for upcoming announcements and updates about the ban. Gamers can check out other gaming titles like PUBG New State for a graphical treat on their smartphones.

Nothing Ear Stick complete design revealed ahead of launch