LG developed a new zoom actuator, a camera component that moves the lens to change the focal length, for their new optical zoom camera. The actuator provides more accurate and faster zooming capabilities, the company claimed. The camera module will support OIS as well.

LG's new camera, on the other hand, achieves the same in a single module, thus making more space available on the phone for other components and also improving battery efficiency, the company claimed.

LG has developed a breakthrough new telephoto camera component for smartphones that will allow users to zoom in from long distances without loss in picture or video quality. The company announced their Optical Telephoto Zoom Camera Module on Tuesday, explaining that the new zoom lens will adopt similar telescopic functions as a DSLR camera, resulting in clean image quality even when transitioning to 4x or 9x zoom ranges. LG Innotek, LG's electronic components subsidiary, said that the company will do a full reveal of the new optical zoom camera at Consumer Electronic Show (CES) 2023. 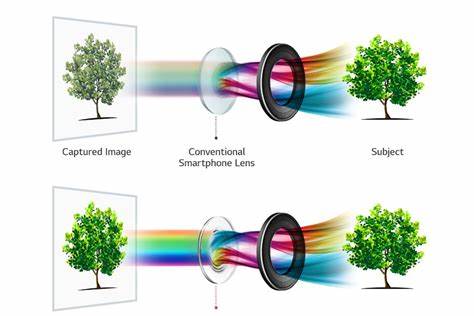 While most other long smartphone cameras use image-quality-degrading digital zoom to reach beyond their native focal length, LG’s design uses moving lenses — much like a traditional DSLR camera lens — which preserves image detail. This camera module also uses a folded-optic design, also referred to as a periscope lens, keeping the overall size down. The result is a lens that covers a 4-9x range, with true optical zoom in between.

Sony is the only major manufacturer to offer a smartphone with true optical zoom thus far, though Oppo is working on one too. The 3.5-5.2x lens on Sony’s Xperia 1 IV is equivalent to 85-125mm, which is quite a bit shorter than the new telephoto module LG is showcasing — it may cover an equivalent range from 100mm to more than 200mm. The shorter zoom range on the Xperia 1 IV limited that zoom lens’ usefulness quite a bit in my testing, and participants in MKBHD’s annual blind smartphone camera test agreed that Sony’s image quality is just behind the competition.

Additionally, LG Innotek claims that their new camera module is thinner than existing modules, thus reducing the infamous camera bump. The company said it's also working with Qualcomm to bring software optimizations like auto-focus, auto-exposure, and auto-white balance to the camera for the Snapdragon 8 Gen 2 platform.