Lens patents a smartphone with an Octa camera cornering design

Lens Technology recently filed a patent with the WIPO (World Intellectual Property Organization) for a device with an octa camera setup. For those unaware, Lens Technology is a brand not known for smartphones, but rather it supplies to other OEMs like Apple, Samsung, and Huawei.

This octa-camera setup is not the most number of cameras we have seen on a smartphone design patent. Back in 2018, LG was granted a design patent for a smartphone with a whopping. However, LG's module packed all 16 sensors in a single square housing with just one flash unit underneath them.

It's a standard-looking smartphone with a full-screen design and minimal bezels. There aren't any notches or punch-hole cutouts for a front-facing camera, suggesting that it would equip an under-display camera solution. And while there's no visible camera at the front, the back is a stark opposite. Arriving at its most notable aspect, the rear features a total of eight camera sensors, with two sensors on each corner of the smartphone. Furthermore, each of these pairs also houses an LED flash in between.

Looking at the patent, the device in question looks quite futuristic, with a full-body screen on the front, which also houses what appears to be a physical button, while no notch can be observed from the patented images. That said, this is merely a design patent that may never come to fruition. Lens Technology isn't known for making smartphones and this is one complex design and form factor for the current generation. 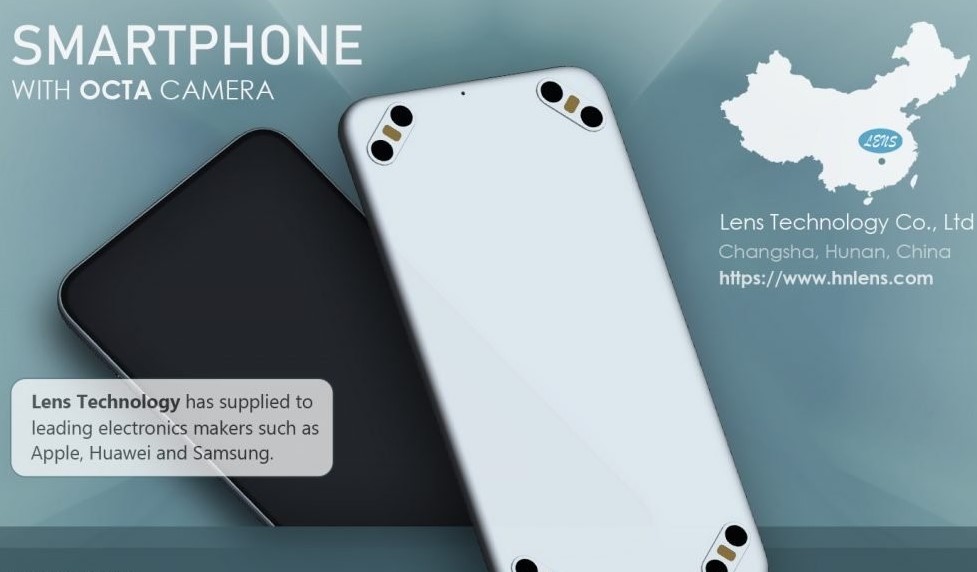 Smartphone manufacturers are constantly raising the bar and level of innovation with each passing year. A few years back smartphones only had a single camera. But in recent times, a triple and quad-camera setup is all but common, especially in flagship models. Now, a Chinese company might be pushing the bar even higher as it patents a smartphone with 8 cameras on the rear.

As its name suggests, Lens Technology also makes camera modules and lenses apart from just cover glass for touch displays. So, we might see a device with 8 cameras in the near future. Although, it would most likely be through another OEM that the company has partnered with. Unfortunately, it is still too early to confirm anything at the moment, so stay tuned for more updates. Smartphone cameras have evolved greatly over the past few years. Not just photography capabilities have improved, but smartphones are also seeing an increase in the number of camera sensors they equip. A triple or quad rear-camera setup is a norm these days while we also saw a penta-camera phone come out last year.

But how much is the maximum? Lens Technology, a Chinese firm that engages in the development and production of parts and components for mobile devices, believes the number of camera sensors can still be doubled. The Changsha, Hunan based company has recently obtained a design patent for a smartphone with no less than eight rear cameras.

The phone has two camera sensors and an LED flash inside an obliquely positioned camera housing in each of the four corners. That makes for a total of eight cameras and four LED flash units on the back. Since it's a design patent, details about the camera system are unknown. Lens Technology, on the other hand, has placed two sensors each in every corner of the phone. This appears to be a consciously chosen design as each housing also gets its own LED flash. The four camera modules may pack different types of sensors, such as wide-angle, ultra-wide-angle, telephoto lens, macro camera, or others.